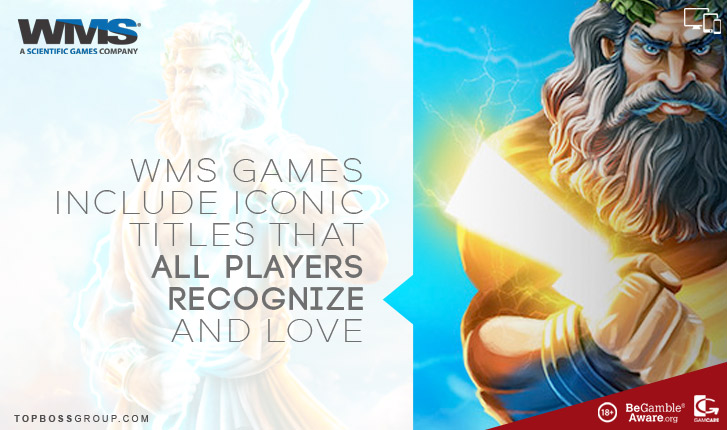 Our review team has rated WMS Casino Games on the categories below and WMS scores an awesome 91% ratings overall.

WMS is a subsidiary of WMS Industries, which became a wholly owned subsidiary of Scientific Games Corporation in 2013. The head office of WMS Gaming is based in Chicago, Illinois.

There are development, sales and field services offices throughout the United States. Their international development offices are in Uxbridge, England and Australia, with International Sales based in Barcelona, Spain.

WMS first entered the slot machine market in 1994, then in 1996 introduced their first successful game, ‘Reel ’em In’, which is a multi-line, multi-coin secondary bonus video slot machine. This was followed by numerous similar games such as Boom, Filthy Rich and Jackpot Party. By 2001, they introduced their Monopoly-themed series of ‘participation’ slots.

WMS has a very well-established reputation for producing some of the most cutting-edge games and manufacturing some of the gaming industry’s most innovative cabinets.

How Many Games does WMS Gaming Have?

WMS Gaming has a library of 100+ Video Slots

What Awards Has WMS Gaming Won?

WMS Gaming has won nominations and awards such as:

How did WMS Gaming Begin?

WMS Gaming is a subsidiary of WMS Industries, who were founded in 1943 by Harry E. Williams as the Williams Manufacturing Company.

Later, in the 70’s, they branched out into the coin-operated Arcade video games with titles including Defender, Paddle Ball, and Robotron: 2084.

In 1987 their name changed to WMS Industries, Inc – this was also at the time when they took the company public on the New York Stock Exchange.

The following year they acquired Bally/Midway.

Midway is known for creating will known gaming titles such as Mortal Kombat, NBA Jam, NFL Blitz and Rampage. In the past, all of these games could be found in an arcade.

In 1999 the pinball side of their business was closed while continuing to peruse the slots/gambling industry. By 2001, WMS introduced their Monopoly ‘participation’ slot series which became a hit.

A ‘participation’ slot is when the manufacturer also gets a portion of the win from the machine.

By 2012 WMS started to concentrate on mobile and online gambling. In 2013 WMS became a subsidiary of Scientific Games for $1.5 Billion!

Various brands fall under the Scientific Games umbrella including: Bally, Barcrest, Shuffle Master and the NYX Gaming Group Limited. Because of all these acquisitions and subsidiaries, players get a huge selection of slots to choose from when playing at a WMS-powered casino.

What type of Slots and Games does WMS Gaming offer?

WMS Gaming is unique in that they focus only on slots. The WMS games portfolio includes iconic titles that players recognize and love, such as Black Knight, Jackpot Party and Reel ’em In.

WMS games showcase some of the world’s most famous entertainment brands including Hollywood Squares, Lord of the Rings, Men in Black, Monopoly, Star Trek, Wizard of Oz, Willy Wonka and the Chocolate Factory.

2001 – WMS introduced their Monopoly ‘participation ‘slot series. A participation slot is when the manufacturer receives a portion of the win from the machine.

The very successful WMS Monopoly-themed series of ‘participation’ slots is where the company licenses or leases to casinos, instead of selling the games to casinos.

Some of these games are networked within casinos or between multiple casinos so that players get the opportunity to win large jackpots based on the amount of machines in the network.

Does WMS Gaming have a Mobile Platform?

WMS launched their first mobile game in 2011, but it was only later in 2012 that they focused more intensely on mobile and online gambling.

WMS have created several partnerships with real money gambling sites, such as Betsson and Unibet, to help get their games online. WMS games are programmed with HTML5 which allows play from a desktop, laptop, tablet and mobile phone.