White Rabbit has been rated by our slots review team and scores an awesome 81% based from the category ratings overall.

White Rabbit is powered by the Australian gaming company, Big Time Gaming. This is a MegaWays™ game with 16,807 Ways to Win, 5 Reels and 4 Rows.

The reels have a storybook look, and they are transparent showing the sunny hills’, trees and giant toadstools in the background.

The ornately designed graphics include unusual colours with memorable landscapes and ambient sounds. The symbols are bright with attention to detail and include the 9 through Aces, Green, Blue, and Red Gems and higher paying Queen of Hearts, Mad Hatter, Cheshire Cat, Dodo, Tweedledee and Tweedledum.

The unique Megaways system simply means that there are no set paylines; instead players can win on any left-to-right combination of matching symbols. The size of the reels constantly changes from spin to spin.

Each reel can have from two to seven positions on it which changes at random. That means a potential 16,807 ways to win on any given spin!

The most rewarding symbol is the Red Queen of Hearts who awards 25x the stake for 5 on a payline.

The average Return to Player percentage is 97.72%

The Wild symbol has the image of Alice running through the forest with the word ‘WILD’. The Wild appears on Reels 2, 3, 4, 5 and stands 2 rows-high. The Wild substitutes for other symbols except for the Cupcake, Rabbit, and the
Feature Drop.

Besides the Wild symbol, during the base game the Caterpillar can appear at random adding up to 4 Bonus Wilds to the reels.

The Bonus Wilds also come with 2x or 3x multipliers and replaces other symbols, except the Scatter and the Feature Drop.

The Scatter is the White Rabbit with his monocle and purple military coat. Land 3 Scatters on reels 2, 3 and 4 to be awarded with 15 free spins and triggers the Free Games feature.

Extending Reels allow for extra symbols to be added during a feature. When a Cupcake symbol lands it gets replaced by 2 new symbols and the number of symbols in those reels will increase by 1x. The reels are able to extend up to a maximum of 12 symbols per reel.

When reaching the number 12, the feature will re-trigger up to 5 times. Should one reel reach the maximum 12, the ‘Queen’s Reel’ will be used – which is an enhanced reel with extra Red Queens and Wilds.

The Feature Drop gives the option to purchase the free spins game at any time. The price begins at 100x the spin bet, collecting gold BGT coins can progressively lower the amount to pay to use Feature Drop.

Land the White Rabbit Scatter on reels 2, 3 and 4 on the same spin to trigger the Free Games and receive 15 Free Spins. The Free Spins are played out on a new set of reels.

The Autoplay option gets the reels to turning automatically without interruption for a pre-set amount of times. 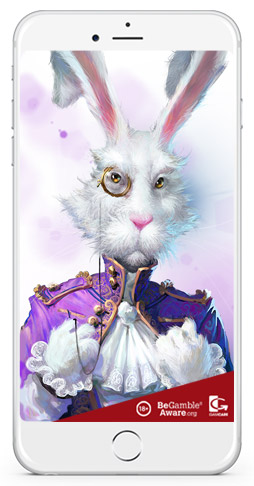