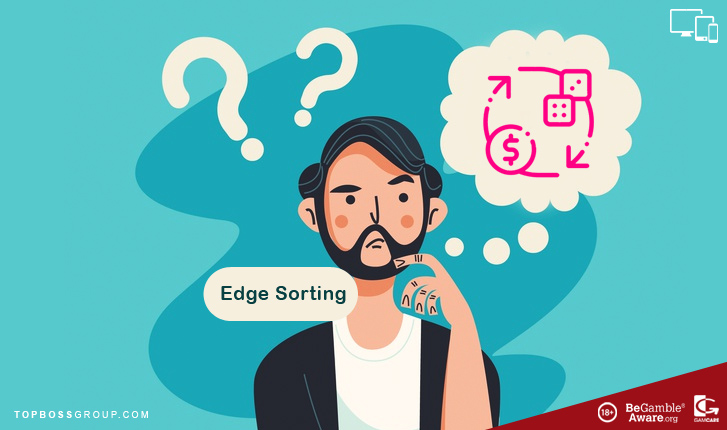 Edge sorting is a technique used in what is known as advantage gambling. Advantage gambling is using legal methods in comparison to actual cheating when playing casino games.

Used mainly when playing house-banked games but also used in games such as poker. A player who uses this method is known as an advantage player (AP).

Advantage playing exploits a game and gives them an advantage over the casino or players. In the past, this technique was not considered illegal. However, casinos usually discourage this type of play and banned players.

Players who use this technique try to determine if a card will be low or high by studying the differences on the backs of cards. Generally, a casino employee such as a dealer will unwittingly sort the cards from low to high.

It’s not a technique that you can use when playing slots, but it can apply in many card games.

In 2012 Edge Sorting came to the fore when a world-famous poker player, Phil Ivey, found a way of exploiting the game. Little did he know that it was also going to be deemed illegal.

Games like Baccarat that was made famous by James Bond is a casino game based on chance and players require no specialized skill to play. Blackjack, on the other hand, is a game where a player will increase their chance of winning by using a good strategy.

During 2012 Ivey played Baccarat at various casinos in New Jersey and Britain, and won vast amounts of money. With the four times he played in Atlantic City at the Borgata Casino and Spa he earned around $6.9 million. Furthermore,  two visits to Crockfords in London won him over $10 million.

His huge winnings prompted both of the casinos to launch an investigation. Casinos realized that Ivey had used edge sorting. Thus enabling him to pick out the good cards using the patterns on the back of them. The casinos argued that he had cheated.

Ivey retaliated and maintained that he had used edge sorting but that he believed it was not cheating.

Ivey’s case was taken to the federal court that voted in favour of the Borgata, and he had to return the winnings he received from them. The judge said it wasn’t fraud, but that it also wasn’t cheating, but the casino could keep the money.

Ivey filed a lawsuit against Crockfords in a court in Britain for unlawfully withholding his winnings. After many appeals, the court ruled in favour of Crockfords and Ivey did not receive his payout from them. The Supreme Court ruled that Ivey had cheated and that they did not have to pay Ivey his winnings.

The court said in their findings that in their perspective, Baccarat is a game of chance and that the cards dealt during a game are completely random, and a player should have no knowledge of the cards.

They said that Ivey knew precisely what he was doing and that he planned and carefully executed his plan. Ivey still maintains his innocence.