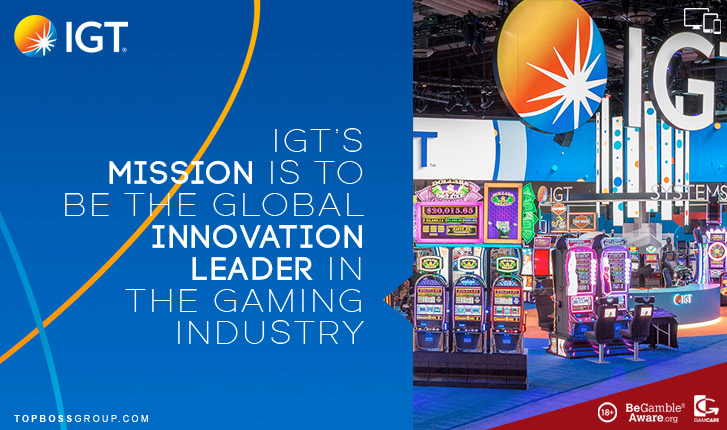 Our review team has rated IGT Casino Games on the categories below and IGT scores an awesome 85% ratings overall.

IGT is listed on the New York Stock Exchange under the trading symbol “IGT.” They have offices around the world including the Las Vegas, Italy, Argentina, South Africa, United Kingdom and Rhode Island.

IGT has over 12 000 employees across the world and serves customers in more than 100 countries. IGT is uniquely positioned to provide the gaming industry with proven solutions for gaming, lottery, digital, and social. Their mission is to be the global innovation leader in the gaming industry.

The IGT vision is to combine the best of their legacy companies to enhance and build on their capabilities and to deliver content, technology, expertise that drive customer and player demand. They also continue to grow leadership in lottery and gaming, becoming leaders in the digital space.

IGT has an expert team of proven leaders who create a powerful gaming and lottery enterprise. They are committed to operating business be creating value for all their stakeholders.

How Many Games does IGT Have?

IGT offers over 400 games for land-based and online casinos including video slots, table games, bingo, and Keno. In 2010, IGT received the ‘Best Slot manufacturer Award ‘and they celebrated the making of their 2-millionth gaming machine!

What Awards Has IGT Won?

IGT Gaming has won numerous awards some of which include:

How did IGT Begin?

IGT – International Game Technology – was an American gaming company based in Las Vegas manufacturing and distributing slot machines and other gaming technology.

IGT was acquired in 2015 by Gtech, who decided to keep the name as International Game Technology PLC. IGT was founded as A-1 Supply by William “Si” Redd in 1975.

The name was changed to Sircoma in 1978, and then in 1981 to International Game Technology. The Company went public in 1981 due to the success of their video poker machine gaming product. This product opened doors for IGT to enter into several other gaming areas.

After IGT’s inclusion on the New York Stock Exchange in the 1990’s, they acquired a number of, less-prominent game developers which included Barcrest, Sodak, and later, in 2011 – WagerWorks.

After IGT was listed on NASDAQ, the company launched many new technologies over the years. Some of these products included the S-Slot – the microprocessor-driven spinning-reel slot and the Player’s Edge video poker machine. In addition, IGT introduced the Nevada Megabucks slot machine, the world’s first wide area progressive slot.

IGT was one of the pioneering companies in the Frequent Player rewards program, and for computerizing player data for tracking.

In 2000, IGT introduced the EZ Pay ticket-in and ticket out technology.

What type of Slots and Games does IGT offer?

IGT has content that covers every type of gaming operation. They continuously stay ahead of global and local developments delivering top-performing and most entertaining titles ranging from slots to casino games, poker, bingo and cutting-edge lottery.

Having the largest number of game themes in the industry and the biggest names in licensed entertainment, the portfolio of games remains unrivalled.

IGT is the largest supplier of slots in the world including those based on major brands and franchises, such as Monopoly and Star Trek.

IGT is also associated with big Hollywood, movie-themed slots including Breakfast at Tiffany’s, Ghostbusters, Godzilla, Grease, Indiana Jones, Sex and the City, The Hangover and The Dark Knight. IGT has also released slots based on television series like American Idol, CSI, Family Guy, Jeopardy!, Judge Judy and the popular the X-Factor.

IGT is also the leading supplier of video poker machines in the world and offers about 9 unique variations of the game to casinos.

Does IGT offer a Progressive Jackpot?

IGT offers Wide-Area Progressive (WAP), Multi-Level Progressive (MLP), Standalone and Skill Based. They also offer a system of Progressive jackpots known as MEGA. Players can get the chance to win at various online casinos running on IGT software.

Games include Cleopatra, Cluedo, Monopoly and Siberian Storm that share the IGT jackpot, and each game has its own variations. The accumulative sum of the MEGA jackpots keeps on growing from bets made by players in any of these games. There is a certain minimum limit and the online jackpots are mostly won when they exceed one million dollars!

Does IGT have a Mobile Platform?

IGT slots are developed with HTML5 software that are compatible with all smartphone and tablet devices running on Android, iOS, and Windows Phone. They even operate on less popular mobile operating systems including Blackberry and Symbian.

IGT software actively uses the advanced Flash technology which allows for play directly on an internet browser. Therefore, online IGT mobile slots and other games do not require the download of any software. IGT games can also be found in the iTunes App Store for users of iPhone or iPad.

IGT was also one of the first developers to venture into social gaming which gives access to a much wider and diverse audience across borders, without any restrictions to core casino enthusiasts.