Vomiting Unicorns Slot – Win up to 10000x your Bet 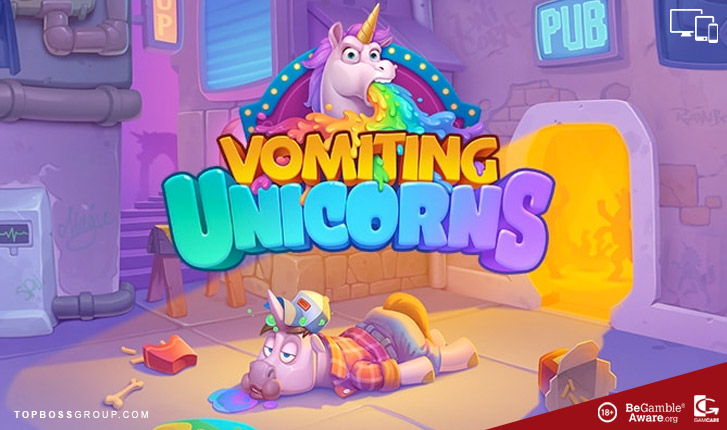 Vomiting Unicorns has been rated by our slots review team and scores an excellent 85% based from the category ratings overall.

Yes, I know it sounds awful mainly as Unicorns are graceful, mystical creatures, most certainly not vomiting. This five reels, four rows 30 ways to win slot is both funny and potentially very rewarding.

Players can win up to 10000x their stake in the Jackpot Feature and Gamevy, the software developer, has further incentivised players with five smaller jackpots making it a total of 6 Jackpot prizes up for grabs.

The game is unique in so many ways starting by the Title of the slot. It also has a wish feature that turns reels into Wild Reels, and the animations are fun, light-hearted and vibrant notwithstanding the unusual symbols. Unusual in the sense when you think of Unicorns you’d expect the symbols to be rainbows, gems, fairies and all things magical and pretty.

Players can place bets of between $0.30 and $15 per spin across all platforms and devices. Vomiting Unicorns RTP is at 95.70%, which is just slightly below average but not so much to make a big difference.

Well, not the kind of symbols one would expect when Unicorns are involved but be that as it may. The symbols are a combination of junk food and fruit with some vegetables thrown into the mix. The Hamburger is the highest paying symbol and to win; you will need between 3-5 matching symbols on a pay line.

Herewith the paytable when you land 5 of the same symbols on a pay line for Vomiting Unicorns Slot:

When you start spinning the reels of this slot game, you will immediately notice five different animated unicorn characters above the reels. There is one Unicorn per reel which all have different facial expressions like anger, indolence, boredom and the look of a ditzy blonde for the one above the last reel.

As the game starts, you will notice that at least one of the Unicorns will make a wish and being real millennials will wish for the high paying junk food symbols. If anyone of them has their wish granted the symbol will fly into the Unicorns mouth. The Unicorn will chew it and immediately vomit a rainbow which will flow down the reel. The reel then changes into a Wild Reel.

When a Unicorns wish is granted a light above its head lights up. The aim is light up all 5 Unicorns head on a single spin to trigger the games Jackpot Spin Feature.

As previously mentioned to trigger the Jackpot Feature, you need to light up all 5 Unicorns on a single spin, not an easy task. When and if you do trigger the Jackpot, boy are you in for a treat. Here you will receive a high-level spin where you could be the lucky recipient of any 1 of the 6 Jackpot Multipliers.

The Jackpot Multipliers are as follows:

Each Jackpot is one of the colours of the rainbow; there is also a light that circles around highlighting the variety of colours when it stops at a random colour you will win the Jackpot prize that corresponds with the colour.

This Slot game Vomiting Unicorns stands out and a perfect strategy for a new and upcoming software developer. The game is entertaining, humorous and filled with lots of excitement with its 10000x winning potential. The only thing that is missing in this slot game is a Free Spins Feature which would have made it almost perfect.