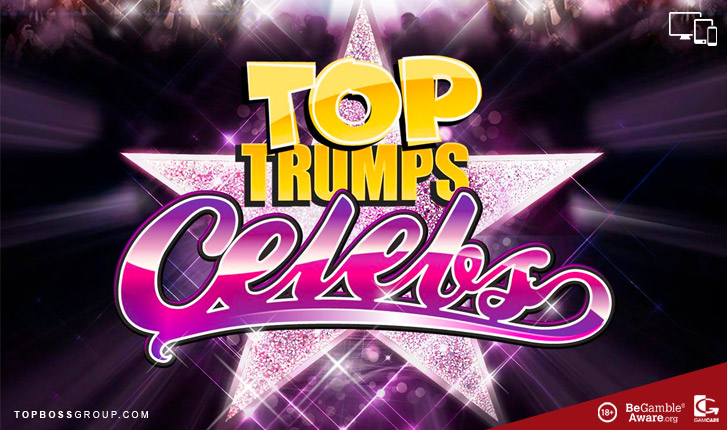 Top Trumps Celebs has been rated by our slots review team and scores an awesome 80% based from the category ratings overall.

Top Trumps Celebs is a Playtech Slot featuring a variety of famous celebrities, singers and actors. It is a 5 Reel, 20 Payline slot with 42 winning combinations. Featuring Scatter and Wild Symbols, Bonus Feature, Free Spins, and Jackpot.

Besides the standard features, there is a unique one called “Choose Your Celebs”. Players can change the celebrity symbols appearing on the reels during the main game. There are no animations in the main game but players can relax to the soft romantic background music.

The range of bet amounts is huge, coin denominations starting at $0.01 up to $1.
The amount of coins placed per line varies from 1 to 10.

16 celebrities appear on the red carpet, select 3 celebs who will then uncover the associated cash prizes. Randomly, a celeb could uncover the Extra Pick with a cash prize, which allows the player to make an additional choice.

The Free Spins round is activated by hitting 3 Top Trumps symbols on any reel.
Free Spins are unlimited, although the Red Carpet bonus game cannot be triggered.

There is the standard Wild, additionally there’s the Scatter, 3 or will award 10 Free Spins with an Extra Wild. The Wild has a 4x multiplier attached to it, and there will be unlimited free spins which can also be retriggered.

Red Carpet bonus round is triggered when the Bonus symbol simultaneously appears on Reels 1 and 5. In the bonus round, a wall with pictures of 16 celebs will appear, each one is hiding a cash prize. Some of the pictures carry an extra pick, giving players more chances of winning.

Gamble Feature allows players to double their prize each time they can correctly guess the color Red or Black of the next card presented to them.

Top Trumps Celebs in an entertaining, colorful and interesting video slot. If you’re into the Glitz and Glam world of Celeb’s, then this game will be the one for you! 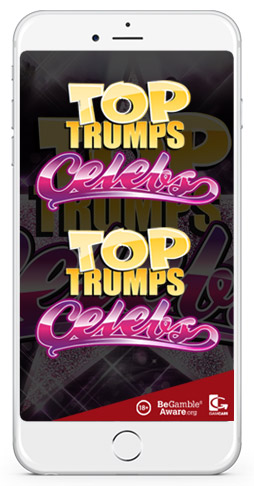