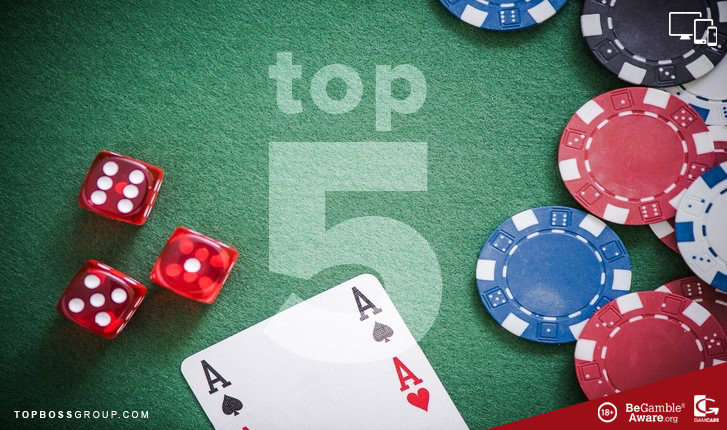 So which are the most popular casino table games nowadays? Casinos have been around for hundreds of years, since 1638 in fact. This was when the Casinò di Venezia opened its doors to the people of Venice. Over the years, casinos have changed somewhat, introducing higher volumes of games, as well as variations of the classic games, while keeping their original premise much the same.

Casinos remain popular today – whether it’s the traditional brick-and-mortar casino or online. But which are the most popular casino table games? Read on to find out more, but before you do, check out: https://casino.paddypower.com/p/live-casino if you’d like to try your hand at any of these online.

In at number 5, we have Craps – which is probably more appealing and exciting in a live environment, than online, due to the social interaction and general rowdiness of the audience that crowds around the table. Craps is a dice game, which to a beginner or at a first glance looks confusing. In reality, once you understand the table and know the rules, it isn’t actually that bad.

Put simply, players bet on the outcome of the combined number of the two dice, when rolled. If the number totals 7 or 11, the players win; but will lose if it’s 2, 3 or 12. Any other number becomes the point and the game continues. The shooter will then roll for all ‘pass line’ bets to win, but if a 7 is then rolled, everyone loses.
It’s a game more popular at Las Vegas Casinos than Europe or China – but you’re bound to be able to find it at an online casino.

Next up we have Baccarat, once associated with high-rollers and it’s also the preferred game of James Bond in the Ian Fleming series of novels. If you’re a fan of Blackjack, you’ll like Baccarat as it’s fairly similar.
It’s a card game, where the options are to back the player (100% stake returned), the banker (95% stake returned) or even the outcome being a tie (the pay-out here is 8/1).

The player and dealer both receive two cards, face-up and whichever hand is closest to 9 wins. When adding up the total of your cards, if the number is double figures, you drop the first number; for example, a 9 and 5 would give a total of 4 points.

Blackjack or 21 as it’s sometimes known is incredibly popular, but some don’t understand the actual aim of the game. The aim of Blackjack is not to reach 21 points (or get as close to 21 as possible) but to beat the banker. This is done  by getting as close to 21 without going bust.

Blackjack is a card game, which sees the dealer and player receive two cards, face-up. Once you have your total, your game-play options include sticking (ending your turn), hitting (receiving an additional card), doubling (receiving an additional card to double your stack) or splitting (separating the two cards to create two different hands). There are also plenty of variations of Blackjack available, due to its popularity.

Roulette is a popular table game and is split into two variations: American and Europe. You’re bound to find both variations online. However the European version has a lower house edge and more favourable odds. This is because both Roulette wheels are slightly different. The European wheel has 37 pockets (numbers 1-36 and 0), while the American wheel has 38 pockets (numbers 1-36, 0 and 00).

The odds and pay-outs on roulette depend on the kind of bet you place. Even-money bets are the easiest to win, but also are the least rewarding in terms of making a profit; while betting on a single number offers the greatest pay-out, but is the hardest to predict. It’s fun and fast-paced, but ultimately, it’s a game of luck.

1. Poker is the Most Popular Casino Table Game

In at number 1, we have Poker, which again can be split into many different variations. However, the most common and popular variation of Poker is Texas Hold’em. You’ll find many online including Omaha, Razz, Stud and even Tournament Poker and Pai Gow (which is most popular in Asia, as it’s based upon a Chinese domino game).

Notably, in the game’s history, there was a Poker boom in the early-to-mid nineties. Around the time that online Poker was introduced, as well as the World Series of Poker being televised. Despite a slight decline after that point, Poker remains more popular today than it did pre-boom – and it’s easy to understand why.

What is Next for the Future of Online Gambling?

Free Online Slots – How to Play