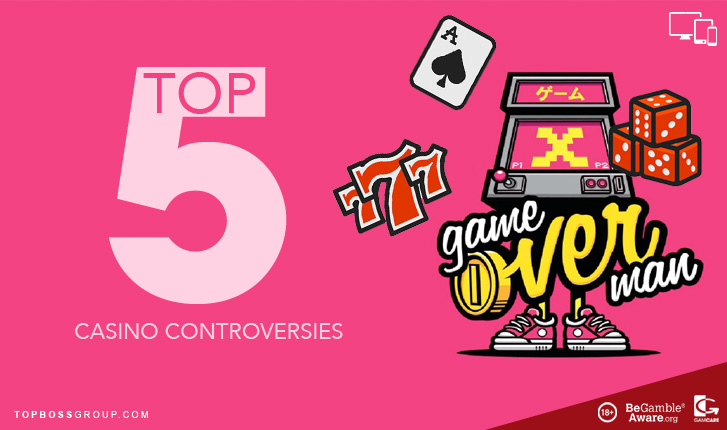 The Most Notable Casino Controversies of all time

There has been casino controversies ever since casinos existed as a business. They have often been surrounded by a shroud of mystery and controversy.

Various stories have emerged over the years about shady things going on in the field, both from the sides of players as well as casinos themselves. Some of those stand out above the others for various reasons.

When you’re playing at online casinos yourself you do NOT want controversy to happen so checkout a reputable casino like Dunder . In the meantime read on to find out our Top 5 Casino Controversies:

Now, counting cards isn’t actually illegal and you can click here to find out how to do it. But most casinos do look down upon it, and will throw you out upon spotting you doing it. There’s hardly anything you can do to argue that decision, considering the casino is private property. In some extreme cases you may even be deprived of your winnings. This is hanks to a tiny clause buried somewhere in the casino’s terms of service.

One of the more notable incidents of card counting that went public involved none other than Ben Affleck. The actor was playing blackjack at the Hard Rock Las Vegas, when he was abruptly asked to leave.

As can be expected, the media tried to make a huge scandal out of the incident. However, Ben Affleck himself hardly seemed fazed. The actor spoke out about the incident and stated that he felt no shame in what he did. He considered  it a fair move by anyone familiar enough with blackjack.

He added that other casinos were already familiar with his counting habit, and had no big issue with the actor playing in them. As long as he stayed away from the blackjack tables. Those casinos were happy to have him as a guest as that added some extra credit to the casinos themselves.

Whether you agree with card counting or not, it’s impossible to prevent. Those that know how to do it can usually end up quite ahead. The problem is coming back to the casino afterwards,. As, like we’ve seen in Ben Affleck’s case, they are usually not too fond on letting card counters back at their blackjack tables.

4) A gang of four was scamming roulette in Ohio

Normally, roulette is not a game you would consider cheatable. It’s purely mechanical and luck-based, so as long as the machine is properly designed and maintained, there should be no way to predict the outcome of a spin.

With a pair of sly hands though, you don’t need to do that, as a gang of four scammers in Ohio discovered. The “team” was relying on simple theft to pocket small amounts of chips from tables as they were playing, which they then handed off to accomplices in concealed locations away from the cameras’ eyes.

Stealing the chips without getting seen was the hard part, and they relied on many sly tricks to fool those around them. Considering they were able to make off with nicely stuffed pockets, they must have really had some quick fingers.

Then, they pretended to continue playing, and after stacking up enough chips from picking them off other tables, they cashed them in for money. The scam sounds simple enough, but in reality, had they kept it going in a more patient and controlled manner, they would have likely gotten away with it for a long time.

Even though casinos are tightly protected by security cameras and various other forms of technology these days, it can be surprisingly easy to circumvent some of those means if you’re clever and dedicated enough. Of course, it’s also a huge risk that doesn’t really end well for those that get caught for whatever reason.

It did take police some time to track them down and catch them as well, as it was hard to follow some of the leads. In the end, authorities were lucky that the crimes resurfaced some time after they had thought that it was all over.

Modern slot machines are controlled by computers entirely, which means that computer glitches do occur. Katrina Bookman, who played at the Resorts World Casino in New York, learned that the hard way.

While playing on a slot machine, the woman was stunned to see the screen flashing the sum of $42,949,672.76. She quickly snapped a selfie with the unbelievable slot and hurried off to claim it. However, the casino refused to honor her winnings, claiming that it was a computer bug. They instead offered to “compensate” her with a free steak dinner, and a couple of dollars.

Reports of a lawsuit were going around at the time, but unfortunately, the woman most likely has no case against the casino. Pretty much all casinos are tightly protected against such incidents in their clauses. Thus absolving themselves of all responsibility related to computer problems.

There has been a lot of debate over the issue on the Internet. Katrina Bookman even has a large number of supporters who stand by her side. Despite that, it’s highly unlikely that she’s going to see any kind of positive outcome from this. The steak dinner she was offered is likely going to be the most she’s going to get in the form of compensation.

The only possible exception is if the casino decides to take pity on her to get some positive PR, but at this point even that’s highly unlikely.

A man walks into your casino and goes up to a slot machine. He starts playing, chatting idly on his phone while waiting for the next spin. He stays for some time – maybe fifteen minutes, maybe half an hour – and walks out. Then he comes back, keeps playing on the same machine, and walks out again. There was nothing suspicious about his playing the whole time he was there, but if you paid close attention, you would notice a few oddities.

For example, if you took a look at the logs from the machine he just played on, you’d discover that your casino was suddenly out a few major winnings. In fact, that guy didn’t lose a single spin while he was there!

Other than that, and the fact that he occasionally pointed his phone at the game screen as if he was taking a picture of it, there’s nothing seemingly odd with the way he played. So what happened?

In 2009, Russia decided to ban all gambling, including casinos. This resulted in a huge number of casinos selling all their equipment – including slot machines – at significant price reductions just so they could recoup some of their original investments.

Slot Machines in the Hands of Hackers

Not all of those slot machines ended up in new casinos. Some of them found their way into the hands of a group of hackers, who spent a lot of time reverse engineering their software and looking for a hole. And their efforts eventually proved fruitful, leading them to the discovery of security holes in the random number generator of models like the Aristocrat Mark VI.

Random numbers are critical in computer-based slot machines, as they dictate everything about the outcome of your spin. Figuring out what number the machine is currently using, combined with the right kind of insecurely designed slot software, would give you the ability to predict exactly how your spin would go.

And that’s what Murat Bliev and his crew did. He would record short videos of the machine’s spins and send them back to an office in Russia, where specialists would analyze the video and quickly determine what “state” the game is in at the moment.

Afterwards, Murat’s phone would vibrate at the precise times he would need to spin the machine at, in order to get huge guaranteed winnings. Using this method, the team was able to score dozens of thousands of dollars in a single session, and they repeated the process over and over again.

That group was eventually attacked by authorities and significantly crippled, but the problem remains open for many casinos worldwide. How many more security flaws like that are out there? How many of them have been discovered by organizations with no intention of making their knowledge public?

1) The man who tried to extort a casino with a bomb so clever, the FBI could do nothing to stop it

In August 1980, Harvey’s Resort Hotel was destroyed by a bomb placed in its casino. Nobody was hurt, as the FBI was well aware of the bomb ahead of time and were able to evacuate everyone. Not that the perpetrator intended to kill anyone, anyway – John Birges just wanted to get revenge on the casino for what he claimed was a $750,000 loss on an unlucky gambling streak.

He wanted $3,000,000 or he would blow up the casino – and he eventually did, although in an ironic streak of bad luck, poor communication prevented him from getting the ransom drop, which the FBI were actually reportedly prepared to make.

Why did they just let the bomb go off though?

The intended way to defuse the bomb was through a panel of 28 switches, of which just a few were the correct ones. Many of the others were rigged to instantly detonate the device.

The bomb could not be moved due to vibration and shock sensors, which would also trigger an explosion. The FBI considered drilling through the frame of the machine to take a peek inside. However, it was designed in such a way that doing so would complete the bomb’s circuit, again detonating it.

X-raying the device proved futile as well, as the inside was too complex to be successfully analyzed in time. Even by the experienced eyes of the FBI’s specialists. The bomb experts even considered flooding the room to minimize the explosion damage, but Birges had even prepared for that. There was a device within the bomb that could detect rising water levels.

In the end, the bomb went off, and Birges was caught due to his son accidentally telling his girlfriend about the incident. Tempted by the reward money, she was quick to call the FBI.

Birges got a sentence in the end. For what it’s worth, his “legacy” lives on in a way – the FBI is reportedly still using his original design in their training.

When will the UIGEA Fall?