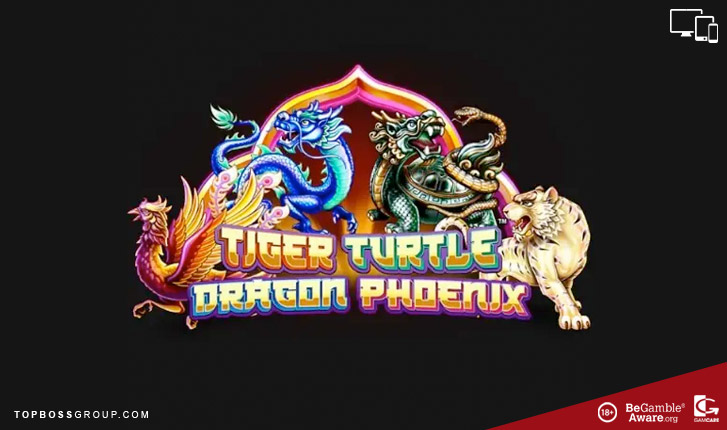 Tiger, Turtle, Dragon, Phoenix Slot has been rated by our slots review team and scores an excellent 87% based on the category ratings overall.

It comes with 4 Jackpots and treasures hidden in the corners of the earth. Furthermore, it is stacked with Wilds. Tiger Turtle Dragon Phoenix is a graphically stunning game offering players smooth gameplay.

Venture into Chinese culture on mobile or desktop from a low roller friendly $0.20 to a high roller $500 per spin.

Symbols in Tiger Turtle Dragon Phoenix include A, K, Q, J, 10 and 9 Royals. There are also Dragons Phoenix’s tigers and Turtles, with the Dragon being the most lucrative, paying out between 0.5 to 5x your stake.

Tiger Turtle Dragon Phoenix has four Wild symbols. The standard Wild appears in the base game on the third reel only and on reels 2, 3 and 4 in the Free Spins. The Gong is the slots Scatter symbol, and it appears on reels 2, 3 and 4.

The Free Games feature triggers by landing the Gong simultaneously on reels 2, 3 and 4 and players receive 2x their stake and 8 Free Spins. Getting an additional three Scatters on the middle reels will give you another 8 Free Spins. There are 2x and 3x Wilds that appear on the middle reel during this feature, these double or treble your outcome, respectively.

Big Jackpots are waiting for players in Tiger Turtle Dragon Phoenix Jackpot Bonus game. The Jackpots get triggered by hitting a gold ornamented symbol on reels one and five, which will present players with 12 Sacred Scrolls.

Players then get to pick three matching Jackpot symbols to reveal any one of the four Jackpots, which are:

Tiger Turtle Dragon Phoenix is a high-quality game with a medium to high variance. The graphics are exceptional, with high pay for winning the Grand Jackpot and the Multiplier Free Spins.   Ready to face four mythical creatures deeply rooted in Chinese Culture? Then spin the reels for some exhilarating gameplay as you strive to win 4000x your stake.

If you enjoy Dragon Slots, you may enjoy Royal Golden Dragon Slot, 50 Dragons Slot by Aristocrat or Dragons Myth.