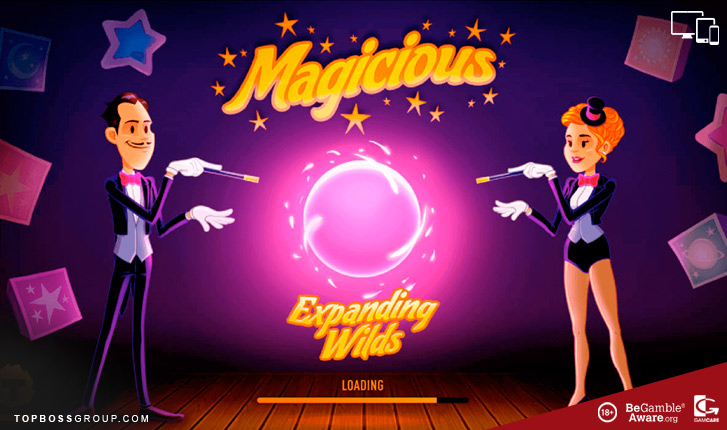 Magicious has been rated by our slots review team and scores an awesome 85% based from the category ratings overall.

Do you believe in the power of Magic?

If not, then this entertaining Slot Magicious by Thunderkick with its 5-reel, 3 row and 10 pay line video slot will make turn you into a believer.

Well take a spin and join us as we venture into the world of illusions and magic with Magicia and Illucious the Magician, to the magical jackpot of $10000.

Hitting the big win will see the Illucious or his red headed assistant Magicia pop the winning boxes and other symbols with their wand and the boxes burst with rainbows of colour and bright lights.

Magicia Slot game offer a generous amount of animations which are complimented with amazing 3D visual effects, which creates the effect of a real live Magic Show with all the bells and whistles.

Magicious does things differently, it wins which go in both directions and expanding wild symbols which trigger re -spins. Now does that not sound like a whole lot of Magic.

This slot features the Expanding Wild with Re-Spin where the Wilds as always substitute for all other symbols and appear solely on reels 2,3 and 4 and appears randomly.

This is how it works: The Expanding symbol appears on the reel with glowing purple spheres and will hold its own reel on which it appears and trigger the Re-Spin for the remaining reels free of charge. The maximum amount of consecutive re-spins given is 3.

The initial show may seem quite mundane however don’t be fooled as these two entertainers have some magic up their sleeves.

They hold 15 icons in wingardium leviosa, or otherwise known as a levitated stage and look like simple colourful boxes with sparkly lights, but that is an illusion because with each spin a player makes, the objects will fall to the ground and be replaced with a brand-new set from above with the power of Magic!

The power of the Magician just gets better, and both stand on either side of the reels with their wands ready to light up any winning combination that appears creating amazing light orbs to shoot across the respective paylines in glowing magnificence revealing the winning prize.

The theme is based on a Magician, his assistant and their Act. The game symbols too, are simple, colourful but not overly detailed and baroque which gives this slot a clean and fresh look and not at all complicated to play.

The Symbols are a Blue Moon Box, Yellow Sun Box, Pink Star Box, Orange Star Box, Green Planet Box, Blue/Silver Star (high paying symbol) and the Red/Yellow star and each one comes with its own line multiplier prize values which range from 2x – 400x depending on the number of symbols on a reel.

Technically Magicia has 10 pay lines but in reality, there are 20 pay lines as matching symbol sequences can be created in both directions, from left to right and right to left.

Magicious has a personality of its own, from Magicians waving their Sparkling wands on a win, to colourful magical levitating boxes and stars, a definite show to remember and one we would recommend. 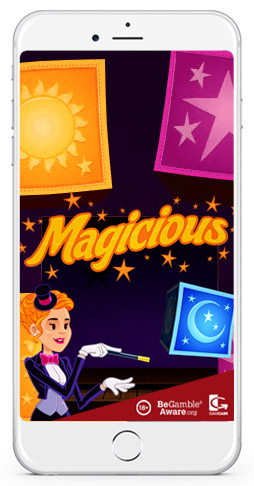