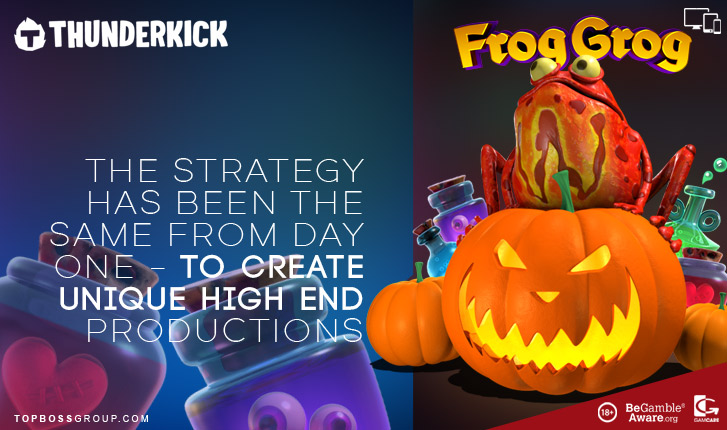 Our review team has rated Thunderkick Casino Games on the categories below and Thunderkick scores an awesome 79% ratings overall.

Thunderkick is an independent gaming supplier, based in Sweden, Stockholm with offices in Malta. The company now trades as Thunderkick AB. Thunderkick is also a Remote Gaming Server (RGS). All aspects of their game and platform development is done in-house by a very dedicated and highly experienced, professional team. Everyone is involved in the entire game development process, from concept to production.

Thunderkick games have a unique look and ‘Fun’ is the name of game! Their slogan is “We are Thunderkick, and we make games.

Thunderkick’s high-quality, cinematic slots load very quickly and are designed using HTML5. Their games are very popular due to the bright, cute and quirky graphics with an unusual layout and style. Most of their slots have a moving and interactive background with many amusing symbols and innovative animations.

Thunderkick produced the latest Arcader slot featuring retro styling and conceptualization. They were also one of the first to utilize video game pixel-art in the well-known slots Roasty McFry and Flame Busters.

Thunderkick is not afraid to undertake new opportunities and have an aggressive regulated market growth strategy. It’s the combination of creativity, drive and passion that helped them create the thrilling games that have reached players around the world.

Since Thunderkick is somewhat of a trendsetter, players wait with great anticipation to see what they are working on!

How Many Games does Thunderkick Have?

Thunderkick is exclusively based on Slots, so no other games can be found on the platform. They offer 20+ high-quality slots which is significantly less than other gaming giants, but they concentrate on creating slots that are designed with laser sharp attention to detail.

These exquisitely designed slots are all modern with a sleek finish and volatile game-play. The Thunderkick slots are suitable for beginners and professional players.

What Awards Has Thunderkick Won?

Thunderkick is still a relatively young company and has not yet been recognized by the important online gambling award shows. Various Thunderkick license holders have won awards such as The Best Online Casino, Best Mobile Casino or Best Slots. It could well be that the advanced Thunderkick slots were a contributor to these awards.

How did Thunderkick Begin?

Thunderkick was founded in 2012 by a group of former designers from Net Entertainment. The company first began by building the technology before it could market itself. By April 2014, Thunderkick had designed 8 online video slots; this gave them the opportunity to sign a deal with Unibet which proved to be the turnaround for them.

As players became more familiar with the Thunderkick slots such as Bork the Berzerker, Esqueleto Explosivo and Magicious, the new software designer became a buzz word in the industry. Ever since then, many online casinos added the Thunderkick games to their slot portfolios. Thunderkick has not yet designed table games or video poker software, but it’s highly-anticipated.

What type of Slots and Games Do Thunderkick offer?

Thunderkick does not offer any other casino games such as Tables, Live Casino, Bingo or Sports Betting but they do provide the best in 3D online slots and keep developing their gaming software to remain a pace ahead of their competitors. Their games are developed with Flash formats and HTML5.

The 3D graphics display in real time which means there is a reduced download size and faster loading speed. Most Thunderkick games use a 3 Row and 5 Reel format with a few exceptions. The games feature scatters, expanding and sticky wilds, mystery games, bonus games with free spins and high multipliers.

New features include the Dropping Symbols, High Voltage Multipliers and Inwinity Spin. Thunderkick also offers a level of configurability where players can adjust everything from the speed of games to the sound effects. Players can also take advantage of the auto-play which spins up to 5 000 spins without interruption. Some of the fun games include: 1429 Uncharted Seas, Arcader, Babushkas, Barber Shop, Bork the Berserker, Flame Busters, Flux, Frog Grog, Fruit Warp, Full Moon Romance, Spectra, Sunset Delight, The Rift and Zoom.

Does Thunderkick offer a Progressive Jackpot?

At present Thunderkick does not offer any of the big progressive jackpot slots. This should change in the future, but for now Thunderkick is more focused on producing the highest quality slots.

Does Thunderkick have a Mobile Platform?

Thunderkick was at the forefront of the transition to the modern and more seamless browser-based HTML5 technology. The vibrant and reliable mobile games are available across various devices such as iPhones and iPads on iOS and most Android devices. The games are visually stunning with minimum clutter or borders.