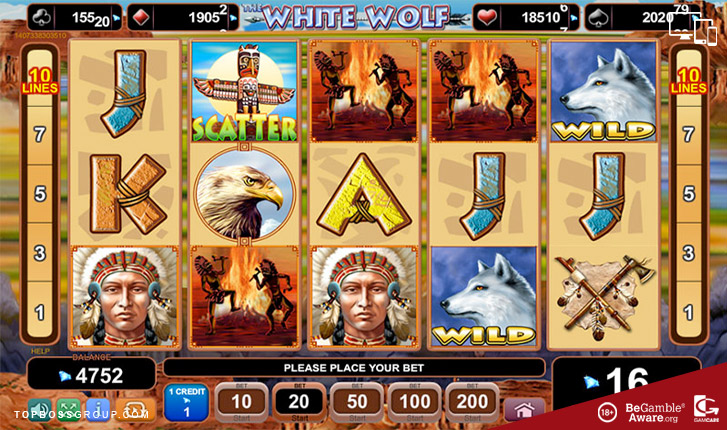 The White Wolf has been rated by our slots review team and scores an awesome 81% based from the category ratings overall.

Play The White Wolf At These Top Rated Casinos

The White wolf is often seen as a Spiritual creature and many Native Americans used to pray to the White Wolf asking him to endow them with prosperity. Is this a coincidence that you have decided to play this slot? I think not.

Take a trip into a world of Ancient traditions from one of the most mesmerising cultures who kept close to Mother Nature which is omnipresent in the theme, the great American Wild.

The background is the entrancing view of Death Valley, with its tall and unconquered mountains. The skies are a gleaming blue contrasting the sparse vegetation to this otherwise unwelcome landscape.

The Video Slot is as silent as Death Valley except when prizes are triggered. The sound effects and music are ones inspired by many of the original Native American tribes.

You can pray to the White Wolf for many of the fun features on this 10 Payline, 5 Reel Video Slot by EGT Gaming like the Wild White Wolf Scatter, Totem Poles, Free Spins with Multipliers as well as a chance at winning any one of the 4 Progressive Jackpots.

Try out this immersive and believable game and see what the Spirits have in store for you.

A Gamble with Nature:

The Progressive Jackpot of the game is called Jackpot Cards. The amounts are split into four suits and this can be seen at the top of the game screen. The jackpot is triggered at random after a win.

You will then be tasked to flip over cards until you find three of the same suit, so choose carefully. If Lady Luck is on your side, you will win the corresponding amount immediately which could bless you with a big win.

The Classic symbols in this game are the 9, 10, Jack, Queen, King, and Ace. These symbols are displayed in clear colourful and the original fonts of playing cards.

We now move on to where the real rewards lie and are met with the ferocious American Eagle, Tomahawks carefully placed on a hide, two braves performing a ritual dance around the fire, a youthful and beautiful Squaws and the big kahuna, the Chief of the Tribe.

The symbols are detailed and eye-catching and when lined up make for a beautiful array of artwork.

Yes, you have guessed it correctly, The White Wolf is the games Wild Symbol and he has two main functions which we will elaborate on later in the review.

The Totem Poles in The White Wolf are the Scatter Symbols and will reward you with generous wins and Free Spins.

Conjuring up the Power of Mother Nature:

As mentioned earlier on, The Wild White Wolf can appear on any spin of the reels and has two main functions. Like most Wild symbols he can substitute for all other symbols except for the Scatter symbol and can assist you in lining up some wild prizes and doubles them, leaving you howling in delight.

The Wild White Wolf can also be lined up across 5 reels and 10 paylines bringing you an abundance of blessings in the form of 10000 coins. Line 4 Wild White Wolves up and you will be rewarded with 2500 coins. You will be accompanied in your howling ceremony as he to will celebrate your winnings by howling at the moon.

The Tomahawks allow you to bludgeon your way to smaller winnings, get 3-5 matching symbols and you will receive 250 coins.

Let’s move onto the Braves who are dancing extremely close to the fire who will reward you with 400 coins for 3 or more. Meanwhile the squaws and creepy witch doctors will be gracious in offering you 750 coins to line up.

If you are by now feeling Brave you can head on to Double Your Money Gamble Feature where you can gamble any prize less than 350 coins on the turn of a card.

If you are on the hunt for Free Spins or bigger wins well then you need to put on your Brave face and venture into the world of big wins.

Start spinning those reels to get 3 or more Totem Poles and you could win up to 5000 coins as well as trigger 15 Free Spins which will triple all prizes one during this round. It does not stop there as you will also have the chance to re-trigger a further 15 Free Spins.

Still feeling Brave well, I hope so as you could suddenly find yourself facing 12 cards all turned face down. This means you have been randomly awarded a chance at winning 1 of the 4 Progressive Jackpots, you must now choose carefully as to which one you would like to play.

Above the reels you will find 4 Jackpot Meters, each have either a spade, diamond heart or club next to it, after you have made your selection you need to find three matching cards in that suit prior to turning over another three in another suit.

Whichever suit you get 3 correct cards in first will be the one you win and will reward you according to that suits jackpot.

This Video Slot game by EGT is Howling good, the theme, design and easy gameplay will leave you wanting more of what this mythical White Wolf has to offer. It to has high stakes, superb bonuses, special symbols and 4 Progressive Jackpot. 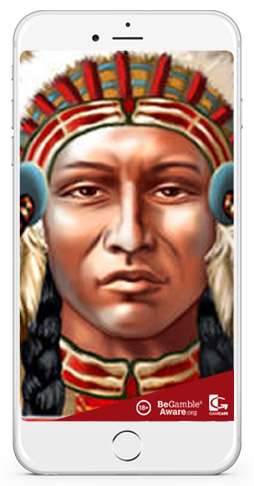