The History of Keno Explored 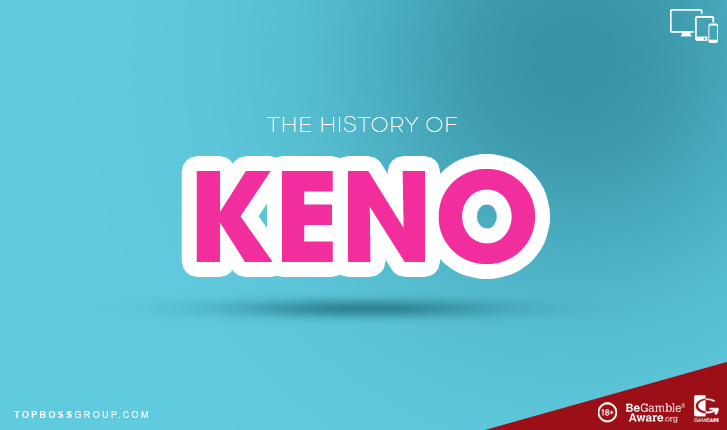 When it comes to the History of Keno, some legends suggest that Keno has its origins in China. One of the legends says that Cheung Leung developed Keno to get money from his people, as it was the only way left to get money to fund the war.

This Keno History legend dates back 3000 years ago to the Han Dynasty. The people of his city were tired of paying such huge taxes, so Leung developed Keno, and this was an exciting alternative to paying taxes. The original game had 120 characters taken from Chinese characters from the poem, “The Thousand Character Classic”.

These characters sat on a type of lottery board, and then the players would place bets and mark their spot. The legend suggests that the game was extremely popular and soon spread to surrounding villages and was called “White Pigeon” as it was birds that took the results to players in remote villages.

It is also thought that Keno was used to raise money to build the Great Wall of China. This came many years later.

The Keno that is played in top online casinos today is different from the original one. Today only 80 characters are used instead of the original 120. In China, they still make use of Chinese characters when playing Keno, but only use 80 characters.

Keno Migrates to the US

During the 19th century, many Chinese immigrated to the US, and with them came the game of Keno. It was known as the Chinese lottery at this time and became popular in San Francisco, as there was a large concentration of Chinese immigrants.

The characters were changed into English numbers allowing English-speaking players to understand the game and be able to participate. This was the start of Keno in the US, because the lottery was considered illegal.

To keep the game going, they changed the name to “Race Horse Keno” using the game as a racing game with each number corresponding to a horse. Players could then pretend they were betting on horses and even used racing terms when playing the game.

In the 20th century, lotteries became legal, and Keno went back to the way it was and was then allowed in casinos.

When Keno came into land-based casinos numbers were written onto paper and placed in tubes. Twenty of the eighty tubes were chosen, and the winning numbers revealed. Wooden balls replaced the tubes, and the numbers carved into the wood known as peas.

Warren Nelson operated the first legal Keno game in 1936 where the balls were placed in a rotating cage. Keno, when played today in land-based casinos is usually generated by a computer and players will fill out a play form and cross off their numbers as they are drawn.

During the late 20th century the Internet changed the way gaming worked and online casinos included Keno as a favourite game and began developing Keno games for the digital realm.

There are variants of Keno that can be enjoyed at an online NZ casino, but traditionally the game still has 80 numbers. The numbers are now generated using an RNG and players do not need to complete any forms as everything is done automatically.

Keno has come a long way since the early days and has developed into a popular casino game at land-based and at online casinos.

Dice Twister May Be The Sister Game To Sic Bo