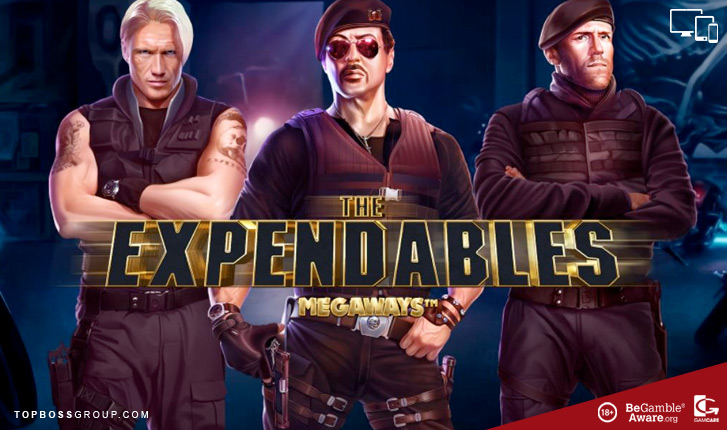 The Expendables Megaways has been rated by our slots review team and scores an awesome 80% based from the category ratings overall.

Play The Expendables Megaways At These Top Rated Casinos

The Expendables Megaways slot by Stakelogic plays out on six reels, 2 to 7 rows and between 324 and 117649 ways to win.

The Megaways engine ensures that each spin is unique when it comes to the number of active pay lines and rows per reel. There are always between 2 to 7 symbols per reel. Furthermore, and you have the opportunity of getting up to 117649 ways to win.

The most valuable of the Symbols is Sylvester Stallone and all the crew except for Arnold is represented in the game. Barney Ross (Stallone pays 12.5x for six on a pay line. The Barney symbol is also the only symbol that pays out on two of a kind combinations. There is also a collectable Bullet Symbol which we will elaborate on as we discuss the slot games features.

The Wild in The Expendables is a dog tag.

The Skull is the Scatter in The Expendables and triggers the free spins feature.

The Expendables has a Bullet Bonus; it allows you to collect bullets whenever they land on the reels. When you fill the Bullet Counter with five bullets, the reels will be hit with heavy gunfire rewarding you with five Wilds. If that’s not in keeping with the theme, gunfire and surprises!

The Cascading Reels Feature in The Expendables removes winning symbols and replaces them with new potential winning symbols which drop from above. This feature will continue for as long as you land winning combinations.

To trigger the Free Spins Feature in The Expendables slot, you need to land at least 4 Skulls anywhere on the same spin. Should you land 4, 5, 6, or 7 Skull Scatter Symbols, you will receive 12, 16, 20 or 24 Free Spins respectively.

Extra Spins trigger if you land 3 or 4 Scatters during the Bonus Round and you will then receive 4 or 8 new spins.

There is also a Progressive Multiplier with no upper limit in play, and it starts at 1x. It increases by 1x for each Cascading Win rewarding you with a rather nice payout.

The Expendables Feature is another added benefit; it removes any Royal symbols that land in winning combinations for the duration of the Bonus Round. Now those are symbols that are undoubtedly expendable.

As always Stakelogic slots have a Gamble Feature, this allows players to gamble their win amount. If a player opts to compete an overlay will appear with a blind card and players will get the option to wager on colour or suit. Once chosen, the card will reveal what it is. You can gamble up to 5x in a row should you be feeling brave and believe your winnings to be expendable.

Should your bet be incorrect, the Gamble Feature ends.

The Expendable Megaways slot certainly does an excellent job of bringing players loads of excitement. It brings some exciting features to the table, namely the Bullet Bonus and the Expendable Bonus. What’s more, it is the first Megaways slot to be based on a movie. So well done to Stakelogic for thinking out the box and bringing top class entertainment to the online gaming industry. 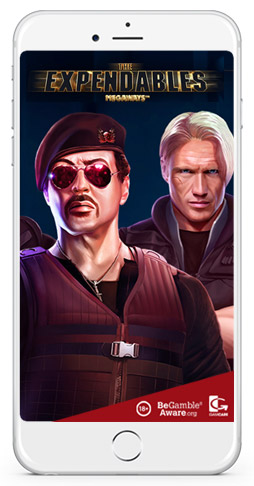