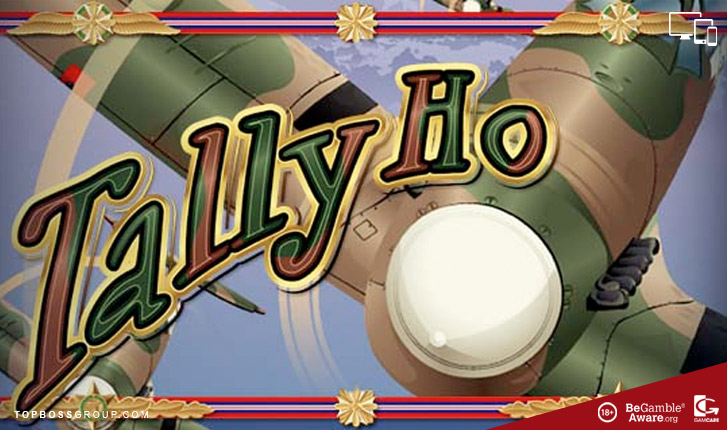 Tally Ho Slot has been rated by our slots review team and scores a good 71% based from the category ratings overall.

150%Match Bonus Up To $3'000Valid Games Slots, Scratchcards and Keno

This Progressive 20 payline ,5-reel slot developed by Real Time Gaming with a World War 2 theme and a maximum win of 10000 coins.

The name of this slot is derived from the motto used by the British and US air squadrons used during World War 2.  This ties in nicely with the games icons as they created to precision to fit in with features during that time. Some of the symbols you will be introduced to whilst playing Tally Ho slot game is a World War 2 fighter Pilot, Roundels, Planes Maps and Medals.

Tally Ho has amazing game features such as the x3 Winning Multiplier on Free Games, Scatter Multipliers and Bonus spins which can be re-triggered and played in Turbo Play.

So, I guess its Tally Ho and off we go!

Tally Ho comes with a maximum win of 10000 coins and offer a Progressive Jackpot amount which starts at $1000 with a maximum bet of 20 coins with the betting range starting at 0.01-5.00.

The Wild Symbol in Tally Ho will only appear on the centre three reels meaning you will never be able to line 5 Wilds up in a row. The best way for you to try and win those 10000 wins is by aiming to line five jet symbols up on any of the paylines.

Your other opportunity for a substantial win would be to get five ladies who will award you with 2500 coins, or five maps with a payout of 1000 coins and finally five medals for 500 coins.

The lower paying symbols thereafter will payout between 100 and 250 coins for five of a kind.

Tally Ho to the Wilds:

The Scatter is a Pilot and only appears on 2,3 and 4 and substitutes for all other symbols except for the Scatter Symbol. The Pilot will only appear on the centre three reels meaning can never achieve a row of five Wilds.

The Scatter Symbols are the Roundels and can pay out whenever there is more than two of them. Should you get five in a line simultaneously you will be awarded 200x your total bet or approximately 4000 coins if you played all the lines.

Tally Ho to the Bonus Spins:

The Scatter Symbols will trigger the 25 Bonus Spins Option and will triple all your wins. The Free Spins can be retriggered and increase your jackpot to 30000 coins should you be lucky enough to get five jets during your Free Games.

Tally Ho also includes a Progressive Jackpot which starts at $1000 and can be triggered at random.

Tally Ho is one of Real Time Gaming’s higher progressive slots, with some memorable payouts and an exceptional Free Spins offer. The theme is reminiscent of World War to and the icons have been masterfully created to enhance the theme. It conjures up a sense of nostalgia however in this case Tally Ho means let’s get those reels spinning and reach for the Wins. 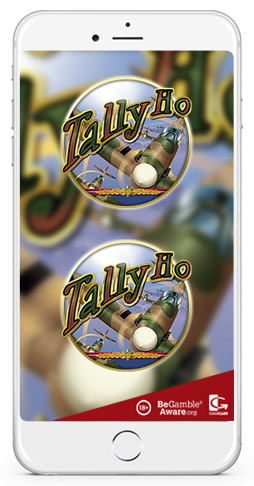