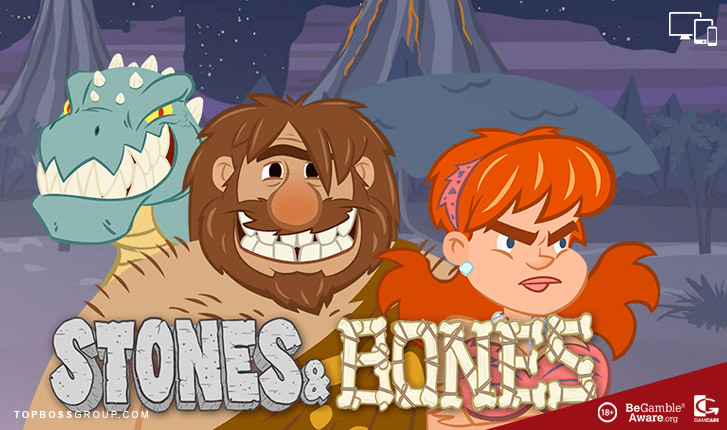 Stones and Bones has been rated by our slots review team and scores an awesome 75% based from the category ratings overall.

Play Stones and Bones At These Top Rated Casinos

This Video Slot by Genii will take you back in time when money was not an issue and electronic gadgets did not rule the world.

Stones and Bones by Genii will take you back to the prehistoric times in this spectacular 5 reels, 30 pay lines Video Slot which boasts some unique features and dynamic gameplay.

The sound effects are simple and comprise of the sounds made by basic wooden tools. Stones and Bones is not a flashy slot however visually captivating and effective in depicting the theme.

Let’s join these Flintstone like characters on a journey that will take us back way, way, way in time.

Stones and Bones of Payouts:

In Stones and Bones the Bonus feature offers some superb wins, however so do the base game symbols. The Elephant awards 500 coins when you land five in a row, the Siberian Tiger pays 400 coins. The Winged Dinosaurs flies with you 300 coins, Steak Symbol 250 coins and the Tumbling Wheel symbol 190 coins with the Axe symbol close behind with 160 coins.

All the above for landing 5 of any of the symbols in a row, this Stone Age is started to look better and better.

A Stone Age of Game Features:

Once the game has loaded you will be taken back to the Stone Age, albeit with a modern twist.

The settings on this game can be altered by clicking on the menu button, the number of lines can also be adjusted allowing you to bot on 1 to 30 lines.

Feeling lucky, then go for the Max Bet Option and bet 300 coins per spin, to make life easier for yourself you can opt for Autoplay and the game will automatically take control of re-spins at your chosen bet value.

This slot has three Scatter Symbols and each one unique in that they come with their own set of features.

The First Scatter Symbol is Angry Wilma, well we think she is the replica of Wilma in the Flintstone’s, so we named her that. This scatter is a real Flintstone as she does not enjoy parting with her riches. “Wilma” only awards 12 Free Spins when five appear on a reel, and 10 Free Spins for four symbols showing up anywhere on the reels and last but most certainly least, seven Free Spins for three Scatters.

The second Scatter is Fred the Scatter brain of the bunch, he enjoys scattering his riches. His scatter wins are multiplied by the total credits wagered during gameplay and he allows the Scatter wins to be added to the pay line wins.

The third Scatter is the Dinosaur, be on the lookout for him he has something astounding waiting for you. Get three or more of Dino anywhere on the reel and it will trigger the Eggcitement Bonus Feature, guaranteeing phenomenal winnings.

In this Bonus Feature you will be given the chance to pick three out of the five unhatched Dinosaur eggs to see what cracking prize awaits you. All prizes are relative to your bet, meaning higher bets, bigger prizes.

As previously mentioned this Bonus Feature can be triggered during the Free Spins Feature.

The Wild Symbol in Stones and Bones is represented by the games logo. Like most Wilds its function is to replace all missing symbols to make up a winning combination, this does exclude the Scatter Symbols though.

You will go Wild when you land five of the Wilds in a row as you will be rewarded with 2000 coins.

Going Back in Time:

This slot game, Stones and Bones allows you to break away from the modern-day chaos and it’s the perfect antidote. It has amazing bonus features, three scatters and a theme like no other.

Why not go back in time where life was simple and rewards great. 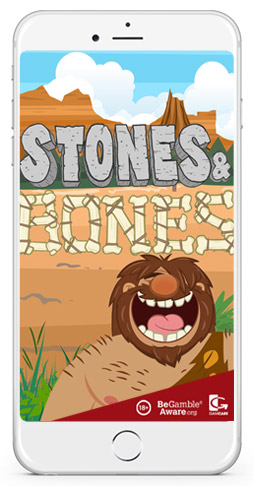