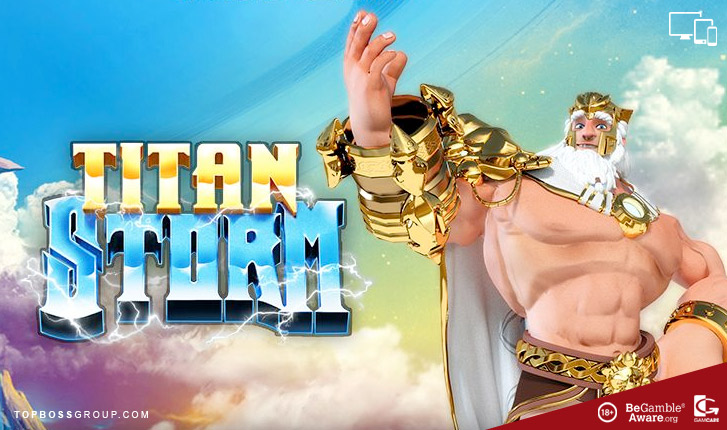 Titan Storm has been rated by our slots review team and scores an awesome 79% based from the category ratings overall.

Take a journey into a land of the Gods and Immortals whilst seeking those riches beyond your wildest dreams.

This Fantasy Slot by Nextgen Gaming features their own unique Gods and Titans with bulging muscles beyond any warriors’ dreams. The women are scantily clad, and this is how they go to war, obviously a distraction for a definite win!

The thunderous graphics will take you back to the 80’s where the moon was larger that life and He Man was your idol though I doubt anybody will admit that out loud.

The Reels are set against the backdrop at the foot of Mount Olympus and it is evident the theme of this slot is based on Greek Mythology, the Titans specifically and the harmonic music adds the finishing touch.

If the graphics are not the enticing factor, then you will most certainly want to play it for the huge wins on these 243 ways to win on the 5-reel slot.

Betting Range of the Gods:

May we suggest before you try and climb Mt Olympus you adjust your bets. The Gold up down arrows are used to set your selected coin size and they range from 0.01-2. The Hearts and Clubs button activated the gamble feature and the play button is to set the reels in motion, This Fantasy Video Slot has an RTP of 95.45%

The symbols are Mythological Creatures, Gods, a Sword, a Skull and high card symbols.

The Wild Symbol in Titans Storm is the Titan himself and appears only on reels 2, 3 and 4 and is different in the sense it substitutes for all symbols including the Scatter Symbol.

The Scatter Symbol is the Golden Doors that open onto the Temple. This symbol also only appears on reels 2, 3 and 4 and all scatter wins are multiplied by the bet.

Wild Scatters, that’s correct Wild Scatters but hold on for a second. The Wild symbol can replace the Scatter Symbol which allows you to trigger the Free Spins feature far easier and quicker and will only be on reels 2.3 and 4 with 10 Free Spins as your reward.

Here comes the punch, during the Free Spins feature the Wild and Scatter Symbol unite, they become one or the other allowing or bigger wins.

Gamble on the Titans:

The Gamble feature can be activated every time you hit a winning combination. You can take a chance to double or quadruple your winnings. By guessing the correct colour of the card your winnings will be doubled or should you guess the correct suit they will be quadrupled.

A wrong guess could cost you to lose everything which will anger the Titans and a Storm of note will erupt.

A Titan of a Verdict:

Titans Storm created a unique fantasy slot with their own version of the Gods, offering thunderously eye-catching graphics and animations, fascinating Free Spin rounds with Multipliers and a Gamble Feature allowing you to double or Quadruple your winnings.

Do not anger the God, instead join them and enjoy some big wins whilst the Titans watch over you! 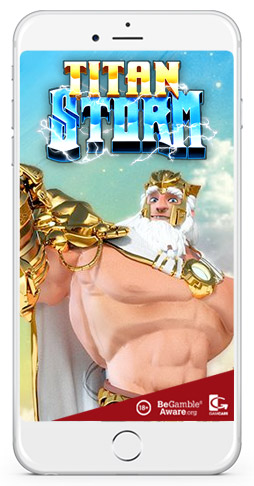