Age of the Gods The First Game In The Slots Series 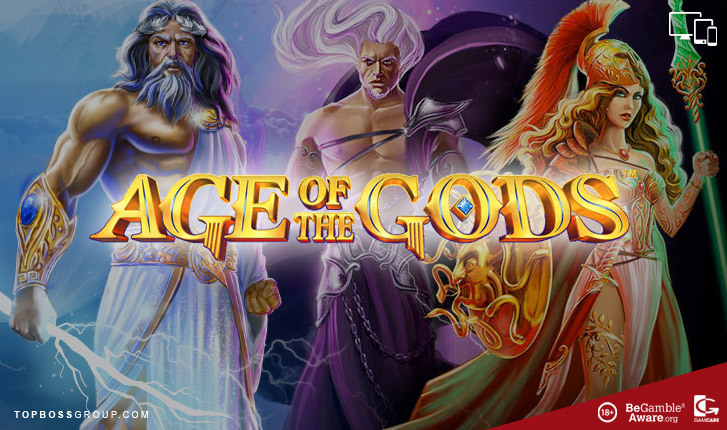 Age of the Gods Slots Ratings

Age of the Gods has been rated by our slots review team and scores an awesome 89% based from the category ratings overall.

Play Age of the Gods At These Top Rated Casinos

Age of the Gods Slots Info

Age of the Gods is powered by the reputable software gaming company Playtech and has 20 paylines, 5 Reels and 3 Rows.

Based on Ancient Greek Mythology the game features Athena, Hercules, Poseidon and Zeus as the main characters.

This drama filled game comes with epic proportions of mischief, deceit and treachery. The immortal characters possess almighty powers with an ability to control the elements and determine the fate of humankind. This spectacularly designed slot displays electric blue, gold-rimmed reels that float against a backdrop containing the palaces of the gods with water cascading into a lake.

Age of the Gods is available on mobile and is compatible with popular devices and tablets, such as Apple iOS and Android, Blackberry, Windows Smartphones and Tablets.

Age of the Gods Betting Range

Besides the scatter, all symbols in the game pay their wins as line bet multipliers. With a maximum line bet of 25 credits and a top line bet multiplier of 10 000x, the epic prize winning potential can reach 250 000 credits in the base game!

The average Return to Player percentage is 95.02%

Age of the Gods Wild Symbol

The big gold ‘Wild’ surrounded by a Laurel Wreath is the Wild symbol. The Wild substitutes for all other symbols except the Age of the Gods Scatter symbol.

Age of the Gods Scatter Symbol

Age of the Gods logo is the Scatter symbol. Land 3 Scatters on the reels to activate the Free Spins bonus rounds.
Age of the Gods Bonus Games. To activate the Bonus round, a special purple screen with 20 golden coins will appear in a grid. The aim is to select and turn over the coins to match up 3 of the same god characters – Athena, Zeus, Poseidon and Hercules which determines the type of Bonus round to be awarded.

All the rounds award 9 free spins to begin with and a random multiplier from 2x to 5x before each single spin. Once a round of Free Spins ends the bonus grid appears again until the Hades icon is revealed. The exciting Bonus features to take advantage of include:

Age of the Gods – Pantheon of Power on Reels Feature

All 5 Gods must appear consecutively on an active payline from Reel 1. This will award 200x the line bet or 10x the stake as a cash prize.

Match 3 Athena symbols to be awarded with 9 Free Spins. Before each free spin, Athena awards a random multiplier between 2xand 5x for that spin. Additional free spins cannot be re-triggered.

The Wild symbol is locked on the 3rd reel during the Zeus Free Spins. Extra free spins cannot be re-triggered.

Match 3 Hercules symbols to be awarded with 9 Free Spins. Hercules appears stacked to fill the entire 3rd reel during the Free Spins. The Hercules also acts as a Wild substituting for all symbols except the Age of Gods scatter symbol.

Match 3 Poseidon symbols to be awarded with 9 Free Spins. During each spin lightning shoots out at random from Poseidon’s Trident turning up to 5 symbols into an Extra Wild Symbol. This Wild can replace all other symbols except the Age of Gods scatter symbol.

Wilds already on the reels can be struck by Poseidon’s trident lightning and scatters will pay before they are hit by the lightning.

There are 4 progressive jackpots which can be won at random. All spins qualify to enter into the Jackpot Game, even those without winning combinations. The Jackpot Game has a 5 x 4 grid with 20 Age of God Coins, where various Jackpot Symbols are hidden. Click on the coins to reveal the Jackpot Symbols, select 3 matching symbols to win that Jackpot.

Age of the Gods gives the choice of 10, 25, 50 or 99 Autoplay spins. Other game settings include Turbo Play on/off, Game History, control of Sound effects/Volume.

Age of the Gods Slot Overview

Slots Title: Age of the Gods