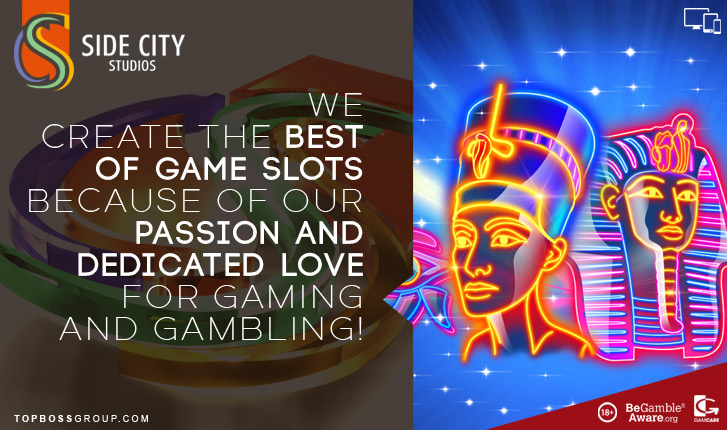 Our review team has rated Side City Studios on the categories below and Side City scores a great 51% ratings overall.

Side City Studios is a wholly-owned subsidiary of the NYX Gaming Group and have been in operation since 1999. Their offices are in Montreal, Canada.

They are a third party game studio developer for online, land-based, and social gaming markets. Their games can be found at some of the largest gaming companies worldwide.

Side City Studios boasts they can create games with HD graphics and 3D animations. At last count, it looks like they only have ten slot games, of which 3 falls under NYX Interactive.

Players can expect a sensory experience that is the same as the other developers in the NYX Interactive group.

Working at Side City is widely considered a privilege and the artists are renowned for their sophisticated creations.  The varied fields of expertise include design, animation, illustration, 3D, graphics, scripting and editing. Above all, Side City creates the best of game slots due to their passion and dedication for gaming and gambling!

They opened in 1999 and has produced some great slots over the years. In 2015, the NYX Gaming Group bought the Company. Since then, it has become easier for Side City to promote their games which are at many online casinos.

What type of Slots and Games does Side City Studios offer?

Since the NYX Gaming Group acquired side City, they have only released three games on the new platform, Egyptian Rise, Fortunes of the Dead Slot and Fortunes of the Amazons. These games feature 3D animations, HD graphics and 243 ways-to-win. These 5 Reel slots are compatible for mobile playing platforms with special HTML5 programming.

Does Side City Studios have a Mobile Platform?

Players can enjoy the feature-rich video slots action on any mobile device, as long as they have a good internet connection.

Demo versions for both games are on the NYX Interactive website.

Side City Studios Based Slots

Swintt – Games for the New Generation