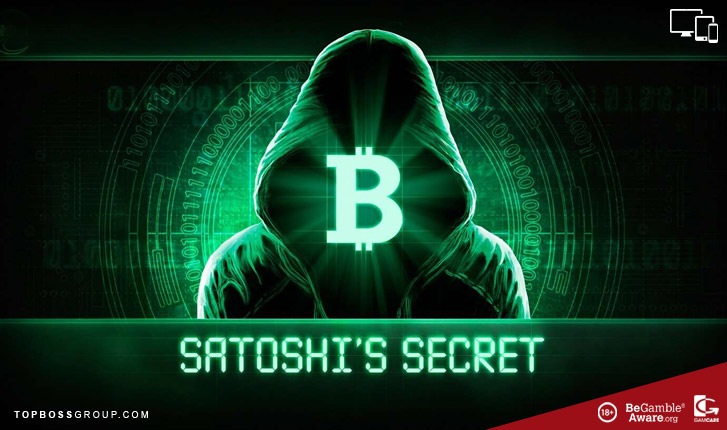 Satoshi’s Secret Bitcoin has been rated by our slots review team and scores an awesome 85% based from the category ratings overall.

Satoshi’s Secret is the most legendary Bitcoin slot, and it’s a bitcoin themed game paying homage to Satoshi Nakamoto, the founder of Bitcoin whose identity is still shrouded in mystery. Endorphina, who is a Czech Gambling Company, developed this Bitcoin slot Satoshi’s Secret. At a glance, the game looks complicated; however, at closer inspection, players will see the symbols are all crypto themed and relatively simple to figure out.

The game is an excellent choice for players who actively engage in crypto trading as it has a secret Bonus Game where players can place bets on currency fluctuations. It is very popular with players at Lucky Thrillz Casino and MegaSlot Online Casino.

The games Wild is a chip with the word Wild on it. This symbol substitutes for all symbols except the Scatter. The Bitcoin Padlock symbol is the Scatter. Furthermore, the game has four high paying symbols of which the hacker is the highest paying.

Satoshi’s Secrets betting range is $0.10-$200, and players can adjust their betting limits at any time during gameplay. It’s a medium variance slot with an RTP of 96.00%

The magic happens when players manage to trigger any one of the three additional bonus games and bonus features listed below.

Here players play off a mini 3×3 reel-type whereby they try and predict the rise and fall in cryptocurrency value. This Bonus replaces a Free Spins feature, and the B symbol activates it. Players need four on reels 2, 3, 4 and 5 to trigger the Trading Bonus Game, and it allows you to open up Forex Trade and invest in various trades as you play.

The Bonus game triggers when the word QWERTY appears across the base game screen on reels 1 to 6. This Bonus is all about hacking, and players can select one of three prizes. Green it’s the easiest to hack; there is also the red and orange levels.

The Risk Game is simply a playing card-based double or nothing gamble type game where players can choose to increase the value of any spin in winning pay-outs. This game aims for players to predict which one of the four cards lying face down is higher in value than the card lying face up.

Satoshi’s Secret is a hacking themed game perfectly presented by Endorphina. The level of detail and atmospheric subtleties are fabulous, and it perfectly encapsulates the perception of hackers allowing players to see how security systems get hacked and people’s lives destroyed. It’s one of the most potent titles to come from Endorphina, and it’s undoubtedly riding the tidal wave of hype in the iGaming Industry.

Prev Next 1 of 3
Bitcoinbitcoin slotendorphina