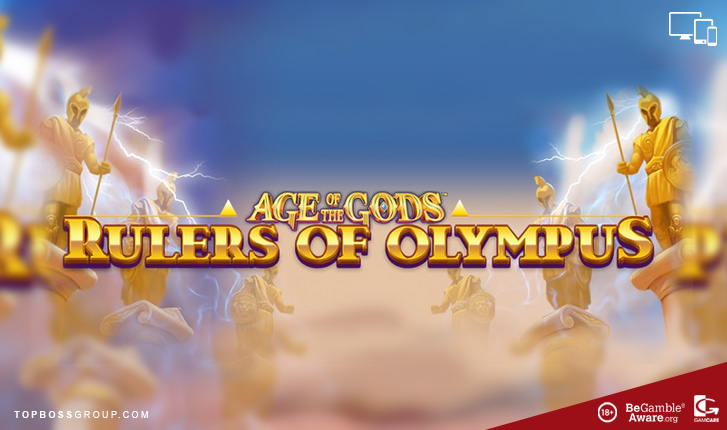 Age of the Gods Rulers of Olympus has been rated by our slots review team and scores an awesome 89% based from the category ratings overall.

This 5 Reel, 25 payline slot from Playtech is based on Greek Mythology. It features Gods and Goddesses like Hera, Zeus, Aphrodite, Poseidon, Hades and Athena. This game comes with two Free Spins features, a Shifting Wilds feature, 4 Progressive Jackpots and finally a Thunderbolt Bonus feature.

Age of Gods-Rulers of Olympus Slot game itself is visually magnificent with the Gods Zeus and Hera in the backdrop and on the reels, you will find the card symbols A, K, Q, J,10 & 9 as well as the Gods/Goddesses Poseidon, Hades, Aphrodite, Zeus, Athena and Hera the latter three being the most rewarding.

The God and Goddess symbols will give you 40x your bet for 5 of a kind across the paylines, further to this there is a wild that surrogates for all the other symbols bar the Scatter Symbols.

The God of Wilds:

Age of Gods Rulers of Olympus comes with Hera versus Zeus Shifting Wilds feature. During the game these symbols can appear at random on the base game spins and you will notice Zeus shifts to the right and Hera to the left until they fall off the reels.

Should they both land on the same reel it will trigger the Battle of Power Free Games.

This feature is triggered when the two Gods Hera and Zeus land on the same reel. When Zeus and Hera clash you will be the lucky beneficiary of Wild wins, and each clash creates additional wild symbols and the feature ends when Zeus is eventually defeated.

The Rulers of Olympus Rewards:

There is a further reward when playing Age of the Gods- Rulers of Olympus, this occurs when the Olympus Free Games Scatter appears on reel 5, you are then rewarded with 7 Free Spins.

Only the higher paying God or Goddess symbols are used, and this will be played on a 50 payline reel set and up to 10 Zeus symbols are locked on every Free Spin for bigger better wins.

This feature can be re-triggered unrestrictedly which means unlimited Free Spins.

The Thunderbolt Bonus feature is triggered when the Bonus symbol appears on reel 5 and trust me you will then be introduced to the wrath of Zeus when this occurs as there will be extra Wild symbols added to the reels.

The Powerful and Thunderous God can add up to 7 Wilds when feeling generous enhancing your winning potential.

The Age of the Gods series has 4 random Progressive jackpots, those being the Power, Extra Power, Super Power and Ultimate Power Jackpots.

To enter the jackpot game, you will need to match 3 identical symbols which are chosen from 20 coins presented on a grid, should you achieve this goal you will be paid out accordingly.

May the Gods be with you! Enjoy another exceptional addition to the Age of Gods series.

Play Rulers of Olympus At These Casinos

Slots Title: Age of the Gods Rulers of Olympus

Age of the Gods Rulers of Olympus Mobile Slot 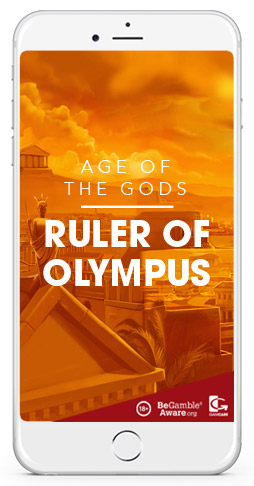