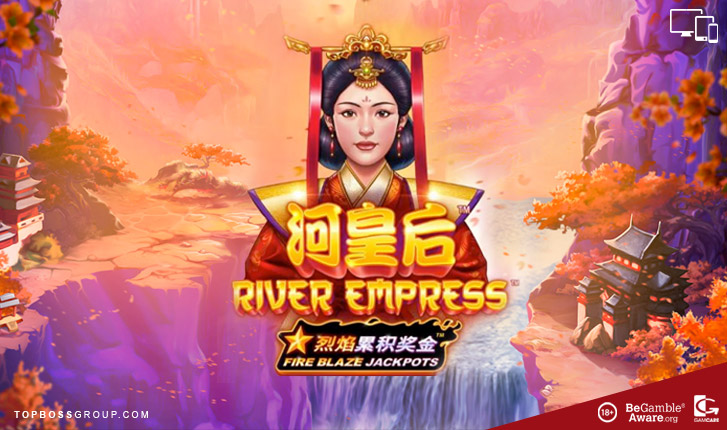 River Empress has been rated by our slots review team and scores an awesome 84% based from the category ratings overall.

River Empress Fire Blaze Slot is a 5 reel, three rows 30 fixed paylines Chinese themed video slot developed by Playtech/Rarestone. This Jackpot slot focuses on the serene River Empress, who has the power to bestow good fortune upon those who play. She also has the ability to set players winnings alight.

There are wins of up to 2000x in River Empress, thanks to the Hold and Win style bonus feature. There are also three lower value fixed jackpots that get triggered during this feature, offering 500x, 100x or 20x the stake

Visually it’s a pleasing slot with a background of soft pinks, peach and gold and somewhat ambiguous for a fiery themed game. The soundtrack is serene and unobtrusive in this slot of medium volatility.

Betting starts at $0.10 and goes as high as $500 per spin in this high volatility jackpot slot from Playtech. Fire Empress has an RTP of 96.50%

The symbols start with low-value Royals, with the higher value symbols represented by Lotus flowers, Fish, Bridges, River birds and the Empresses boat. The River Empress is the games Wild.

Players need to land 3 to 5 Scatters on the reels of River Empress to trigger the Fire Blaze Free Spins feature. They receive 4 to 10 Free Spins and pays a small prize of its own of up to 50x the stake. Extra Wilds get placed on the reels, and this feature gets re-triggered when you land another 3 Scatter symbols during the existing Free Spins.

The Hold and Win or the Fire Blaze Respins requires Pearl symbols in view. Once players have landed the needed number of Pearl symbols, they turn sticky and goes through 3 Respins. Should additional Pearls land on the reels, the Respins reset to three. Alternatively, players could get one of the fixed jackpots with the top one requiring all 15 positions to have Pearls on them.

River Empress offers players four fixed Jackpots that randomly trigger during the Free Spins feature. The Grand Jackpot gets won when all positions on the reels get filled with Pearl symbols. The Jackpots payout as follows:

River Empress Fire Blaze Slot from Playtech has the potential to reward super prizes. It’s all about the Free Spins and the Grand Jackpot, which pay out some big wins. If you are a fan of Asian themed slots of medium volatility, River Empress is your game.