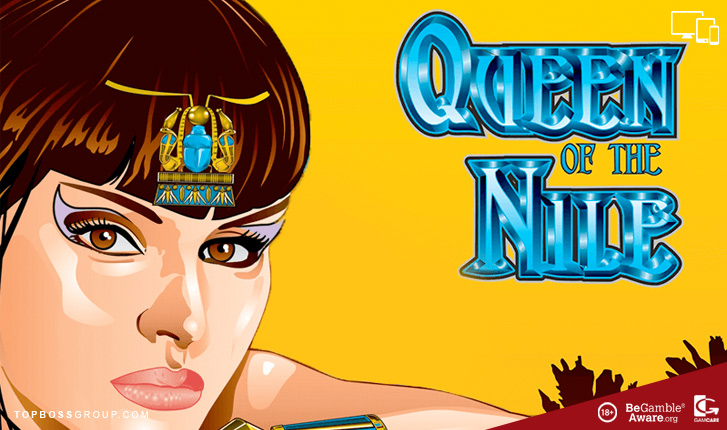 Queen of the Nile Ratings

Queen of the Nile has been rated by our slots review team and scores an awesome 82% based from the category ratings overall.

Play Queen of the Nile At These Top Rated Casinos

Aristocrats Queen of the Nile

This Video Slot by Aristocrat is a 50-pay line, 5 Reel slot which brings you a river of prizes for spotting Ancient Egypt themed icons such as Pharaohs masks, golden rings and hieroglyphic letters.

Queen of the Nile has no shortage of thrills with their super bonus games and features such as Scattered Pyramids, Wild Queens, Gamble Feature and Pyramid Free Spins.

Set against a rich golden backdrop of yellow, gold and turquoise the wealth of Ancient Egypt oozes through graphically notwithstanding the fact that you have the beautiful bejewelled Queen of the Nile watching your every move.

This slot offers players over 60 different betting combinations and it caters for players on a tight budget and the high rollers. The min coins per line is 1 with the minimum betting range being 2 and maximum 200.

The luck of the Pharaohs could be on your side from your very first spin, winning prizes on the lowest symbols, the hieroglyphics. These symbols pay between 2 and 125 coins for 3 or more matching symbols.

The rewards increase when you hit the higher symbols, let’s take the Nile Thistle, this symbol pays up to 250 coins the exact same amount as the Eye of Horus

A word of warning: Beware of the creepy Scarab Beetles, however spotting them could fill your tomb with 400 coins. The top paying symbols are the symbols emblazoned with gold, the Golden Rings and the Golden Pharaoh Masks.

These two symbols will pay out 750 coins for hitting 5 of either one.

Wild about Queen of the Nile:

This Video Slot has two bonus symbols those being the Wild Queen and the Scattered Pyramid and each one has its own individual function.

To keep the adrenalin flowing players need to do their utmost in getting 4 and 5 symbols as they respectively pay 2000 and 9000 coins now that’s a Regal Reward.

The Queen of the Nile Scatter Symbols also award big instant prizes of up to 400x your line bet, and this is when you hit 5 Pyramids on the reels.

There are also smaller prizes for 2-4 symbols whereas 3 or more scatters will as an added bonus trigger 15 Free Spins.

The 15 Free Spins feature is triggered when 3 or more scatters are hit, further to this should you win during the Free Spins game your prizes will be tripled.

In Queen of the Nile all winnings can be gambled on the Gamble Feature, here you are given the opportunity to double your winnings by predicting the correct colour of the card or quadrupling it by guessing the suit. All prizes can be gambled at 5x.

Style of the Nile:

The Nile has its own style and aura, and the Queen of the Nile portrays exactly that with a fun theme, generous prizes and bonuses to suit every wallet allowing players to share in the riches of the Pyramids and enjoy time spent with Queen Cleopatra the last Egyptian Pharaoh.

Queen Of The Nile Overview

Slots Title: Queen of the Nile

Queen of the Nile Mobile Slot 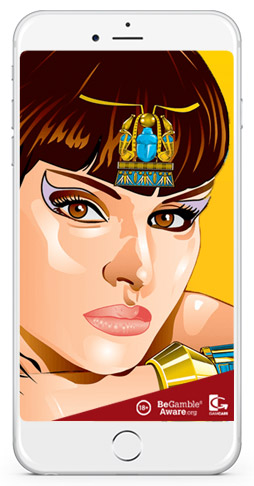