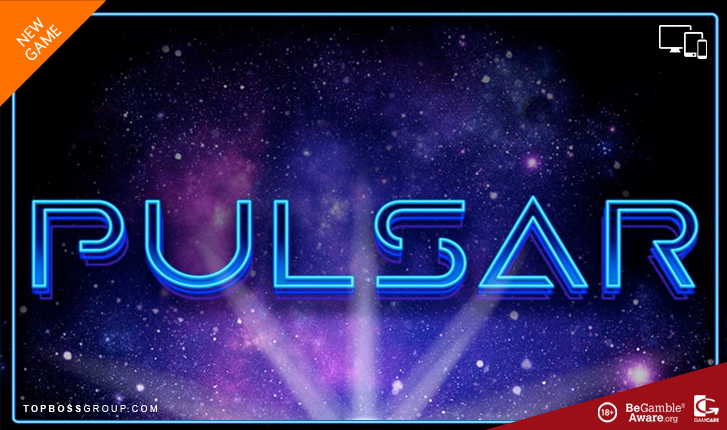 Pulsar Slot has been rated by our slots review team and scores an awesome 83% based from the category ratings overall.

Pulsar Slot is a Brand New RTG slot with Cascading wins.  RTG start the year off to a cracking start in their first release for 2020, Pulsar. It’s a sci-fi slot with unique game set up and action which is not the norm for a slot game in this particular category.

Travel into Space playing this 5 reel, 3 row , 20 payline slot and take advantage of Cascading Wins . The games design is in the form of a honeycomb which is actually the reels structure for the 20 fixed paylines. The Reel structure uses the honeycomb set up of 2-3-3-3-2 symbols and Pulsars backdrop is the Universe.

Pulsar Slot also offers a Jackpot, a non- Progressive of a 150x your bet on one spin as well as Free Spins, Multipliers and Scatters you won’t find them here instead you can reap the benefits of the Cascading Wins and play pivots around the exploding Neutron Stars.

As they say in the classic reach for the stars and you may grab the moon as Pulsar has a galaxy of wins for those who are ready to take to the skies.

Pulsar Slot has a solid betting range which starts at $0.20 and goes as high as $100 per spin. This will allow players with varying budgets to blast off into space and reap some rewarding benefits.

The symbols in Pulsar are a variation of coloured Neutron Stars which all have their own distinct blast pattern.

Finding the Cascading Wins is what you are after when playing Pulsar slot game. So the more combinations you match the better. The advantage of a Cascading Win is its ability to move around the spin symbols and could result in more winning combinations. This also means you could land up with multiple win payouts of up to 50000 coins on a single spin.

The Cascading of Symbols are the result of Neutron Stars exploding or Winning Spins.

As previously mentioned there are 4 Neutron Stars, each with their own blast pattern. Every time a Neutron Star appears it receives a number from 1-3 and decreases by 1 on every Cascading Win until it eventually hits zero.

When it reaches zero it destroys all the symbols by replacing them with symbols that are randomly selected. Furthermore Neutron Star explosions can cause other stars to explode as long as they are in the same blast pattern

Pulsar slot brings something new to the table in terms of gameplay. It’s a sci fi theme and the planetary graphics are spectacular. Although It does not have the usual bonus feature but it more than makes up for lack thereof with its Cascading Wins Feature and explosive Neutron Star Functions. Overall a unique and very different slot. Furthermore,  it is has become very popular with players from Diamond Reels Casino and Cherry Gold Casino.

On Bubble Bubble With Your 1st Deposit 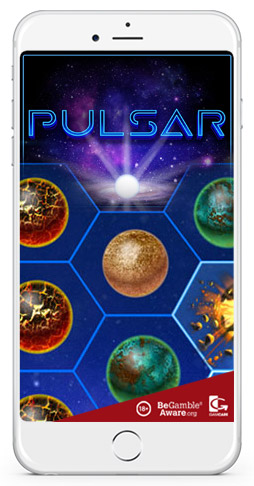