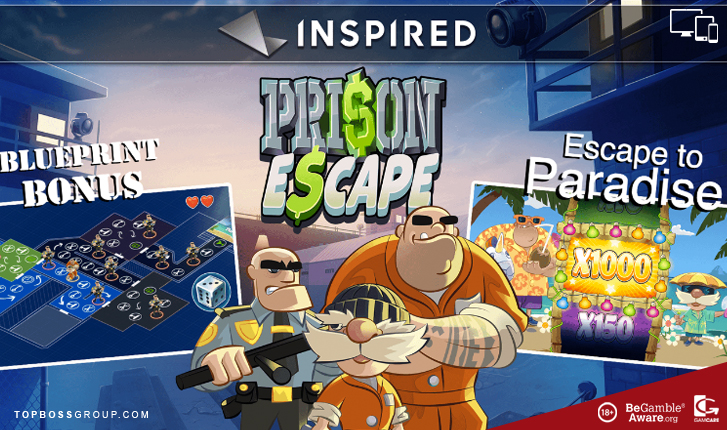 Prison Escape has been rated by our slots review team and scores an excellent 88% based from the category ratings overall.

Prison Escape Slot is a Newly released video slot from Inspired Gaming. Assist 2 criminals burst out of jail and play the Bonus Board Game to help them.

Now don’t be fooled by the title as it is not a simple slot game. It has a certain amount of depth to it and comes with some interesting and rewarding features. It’s a 5 reel, 3 row 10 pay-line slot with the prison grounds as the background. You will see spotlights occasionally scanning the area with an ominous dark figure lurking around.

To become part of this Prison Escape you need to pace a minimum bet of $0.10 with the maximum being $25 per spin. The RTP is an interesting one and varies wildly due to all the choices this slot game offers its players. Expected RTP’s between 31.75%-96.30% for an individual game cycle.

Prison Escape Slot has 10 base game symbols. Four are  J, K, Q and A all can be seen in a nice clear and bold metal font. The mid table icons are a Prison Van and a Spotlight.

We then have the Prison Guard and two rather harmless looking Criminals. The most valuable symbol is the logo and is worth 20 x the bet for 5 of a kind. Whilst the other symbols require 3 of a kind to reward you, the logo will reward you with only 2 of a kind.

The Wild lands on reels 2, 3 and 4 during the base game but during the Control Room bonus, it lands on every reel.

When you receive your first win you have a choice, either Gamble your winnings or collect them.

Should you decide to gamble the two criminals will slide down a zip line. If they make it to the far side the Blueprint Bonus Round is triggered. Alternatively If they fall during their descent, your win is forfeited and you revert back to the base game.

If your win is 23 x or more your stake you get the choice of gambling part of your winnings and collecting the balance.

The gamble feature can be turned off or be set to appear on wins 5x or higher on wins.

Once the Blueprint Bonus has been triggered it moves away from the reels to a board game. The game consists of rooms and a dice which is used to move the 2 Criminals across the board. If the two criminals land on the square with the guard twice, the round is over.

During the Prison Escape Slot Bonus game players move around the board collecting items that boost the mini game. There are 3 rooms with 3 different mini games and they are:

Players who make it to the end of the Blueprint Bonus Trail get to spin the Paradise Fortune Wheel. The prizes on this wheel can be as high as a 100 x their stake.

This feature will appear if the player has a credit balance which is less than the cost of a single spin. It’s similar to the Gamble Feature where players are awarded one more spin at the current value if successful. .

Prison Escape is a rather interesting video slot game with a bunch of unique features. Furthermore, Wins up to a 1000 x your bet are up for grabs if you make it to the end of the trail with both lives in tact. Finally, this slot is very enjoyable and the cartoon characters add extra fun to the prison break. 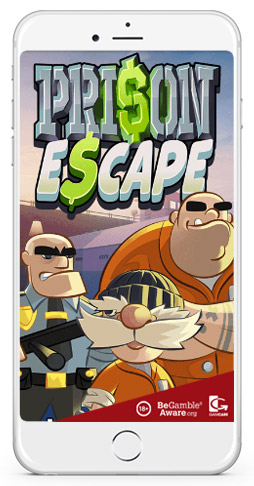