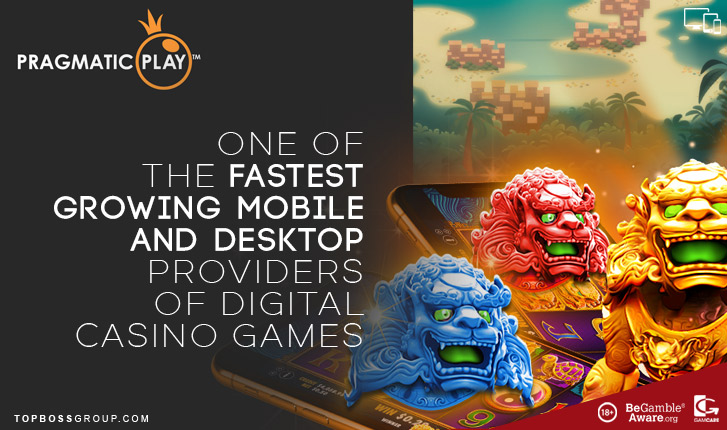 Pragmatic Play is one of the fastest-growing providers of digital casino games for online gaming. Their library features software for video slots, table games, video poker and mobile casinos. The games are carefully engineered for the best performance and designed to function on all desktop and mobile platforms.

They release two new games per month on average. This is quite a lot considering the massive amount of work that goes into each game.

The multi-team effort begins with research and brainstorming followed by mathematicians, audio specialists, designers and programmers.

The mission of Pragmatic Play is to be one of the leading game providers by creating an unrivalled gaming experience. They aim to offer the highest quality products, services and superior performance. Every single game is tested to ensure both randomness and fairness. Only when the game successfully passes the stringent tests will it be released. Companies who test their games include Gaming Laboratories International (GLI), BMM and QUINEL.

Pragmatic Play provides the best range of uniquely designed games, which has effectively drawn the attention of leading global casinos.

How Many Games does Pragmatic Play Have?

Pragmatic Play offers over 80+ HTML 5 Games and 80+ Mobile games, and are available in 78 countries with 23 languages.

What Awards Has Pragmatic Play Won?

Pragmatic Play has won numerous awards, some of which include:

How did Pragmatic Play Begin?

Pragmatic Play started in 2007 as Topgame Technology by a group of experts with extensive gaming industry experience in designing software for online casinos.

In 2015 investors came together and bought out most of the shares of TopGame and re-branded as Pragmatic Play. By 2016 Pragmatic Play launched a new web site, signed up new partnerships with the likes of PokerStars Casino, and got licensed by the Malta Gaming Authority. They have since opened offices in Sliema, Malta and have representations in the United Kingdom, Romania, Ukraine, India, Philippines.

Pragmatic Play may not be one of the biggest names in the industry, but they have already won awards and developed a solid reputation.

The graphics have smooth animations with matching soundtracks and sound effects. The Slots feature a diverse variety of themes such as history, mythology, popular culture and more. The slots are also notable for the sense of humour in the games.

Many of the slots include multipliers, free spins and bonus rounds which have Stacked, Expanding or Sticky Wilds.
Pragmatic Play also develops a full suite of casino games with various table games, speciality games and video poker machines.

There are several versions of Blackjack, Roulette, Video Poker, Bingo and Keno. Their software also includes some Live Dealer Tables that allow players to interact with the dealers.

Do they offer a Progressive Jackpot?

The Company has a limited amount of progressive jackpot games.

Does Pragmatic Play have a Mobile Platform?

There are over 80 games available in HTML5. The games function smoothly on iOS and Android. Furthermore, the games are easy to play, flexible and responsive.

Pragmatic Play boasts that they are one of the fastest-growing mobile providers for iGaming. Their games are at Casinos like GSlot, Locowin Casino and Slingo Casino.

TeleVega Casino has over 4000 games