Planet Of The Apes NetEnt Slots 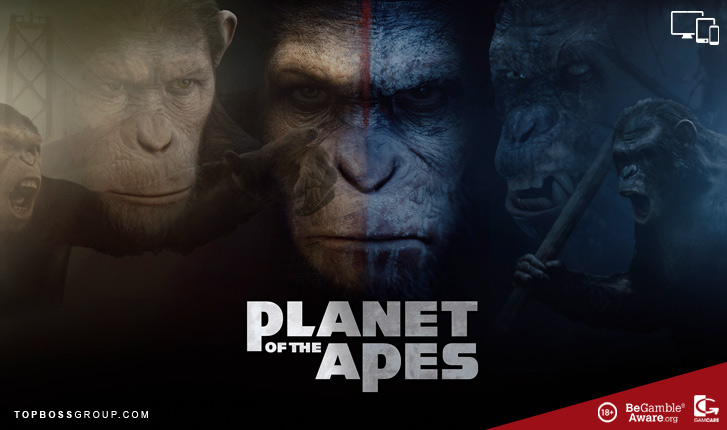 Planet Of The Apes Ratings

Planet Of The Apes has been rated by our slots review team and scores an awesome 89% based from the category ratings overall.

Play Planet of the Apes At These Top Rated Casinos

Planet of the Apes Introduction

Planet of the Apes is a 10 reel, 20 payline slot produced by NetEnt in association with 20th Century Fox.

The Planet of the Apes has a split-screen which is like having two games in one.

There are many bonus features which include transferring stacked wilds, cash bonuses and transforming symbols in the Dawn and Dual features.

The game takes players between the two different phases of the life of Caesar, the Ape Army leader. The animations and graphics are of high quality with lots of small clips from the movie shown between bonus features and big win sequences. This game is fully mobile-optimized so it can be enjoyed on a Tablet, iPhone or Android devices.

The Wild symbol replaces all symbols except the Scatter and Bonus symbols. The stacked wilds use the two separate symbol grids.

There are 2 Scatters, one for each reel set. Scatters on both reel sets are treated as 2 separate symbols and get counted separately but the values remain the same. 3 or more Scatter symbols appearing anywhere on the reels award a win.

Triggered when the Rise Bonus symbol lands on the 1st reel in the Rise grid. An additional cash bonus is awarded for every human and ape symbol appearing on the screen except the scatter.

Triggered when the Dawn Bonus symbols lands on the 5th reel in the Dawn grid. All ape and human symbols transform into the same symbol.

Can be triggered at random – 1 symbol is chosen from each play grid but they cannot be the same symbols in both grids. When activated, the reels will only contain the chosen symbols with the other reels showing blank spaces.

If the symbol lands in its corresponding play grid, it will stick – should it land in the other grid it will transfer across to the correct play grid.

Re-spins will be awarded if at least 1 new symbol appears in its own play grid. The re-spins will continue until no new symbols in either grid get added.

10 Free Spins will be awarded when 3 or more Rise scatters appear anywhere on the Rise reel-set in one spin. During this feature only the Rise play grid stays active and the Wild symbols that appear on each spin will be collected in a Wild meter.
After the reels stop spinning on the final spin and before any wins are evaluated, all collected Wild symbols will be placed at random on the play grid and the total win gets evaluated.

15 Free Spins will be awarded when 3 or more Dawn scatter symbols appear in the play grid. Collect 3 different symbols to fill one of the meters: Multiplier, Extra Wild and Extra Free Spins

The Auto Play option can be set up to spin the reels for 1 000 consecutive spins without interruption.

This slot is a true reflection of the recent Planet of the Apes movies, and the unique dual reels design will provide more plenty action! It will appeal to more advanced players.

Planet of the Apes Overview

Slots Title: Planet of the Apes

Planet of the Apes Mobile Slot 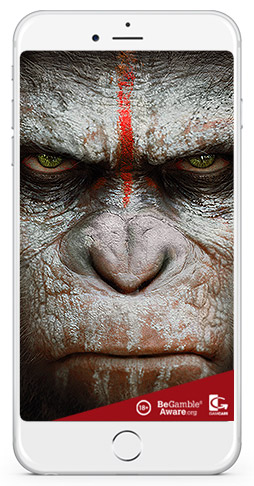