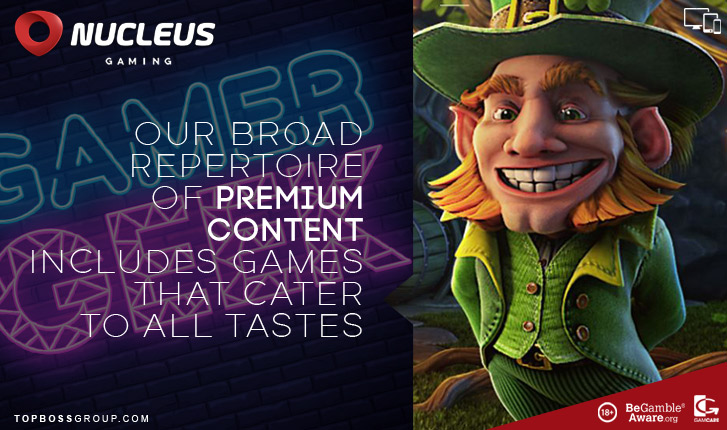 Nucleus Gaming is a software development company who are based in Malta and specifically cater to players in the USA. Their premium content includes games to suit all tastes with superb 3D games since their inception in 2015.

They appear to work with BetSoft who are renowned for their 3D Video Slots. Upon closer investigation, it seems their 100+ games are very similar to those developed by Betsoft. However, the graphics and titles vary.

The 3D graphics and cinematic style of their games are excellent and impressive. Furthermore, they offer a plethora of quirky animations. Their games are also available at many of the well-known online casinos.

When reviewing their notable collection of games, they appear to be mainly 3D slots. However, they also list a couple of classic slots and single hand Video Poker games and 20 Table Games.

When playing their games, one can see the dedication to quality from this well-rounded gaming provider. Although they may not be at the forefront of other providers slots, they do offer sufficient variety.

Where Nucleus Gaming shine is their 3D cinematic slots filled with stunning animations and interactive features.

Their pay lines and reels also come in all different shapes and sizes. When playing on your mobile, you will be enamoured by their cascading symbols and winning combos forming from adjacent reels. Their slots also come with special features which comprise of Scatters and Wilds as well as more complicated systems which at times reward more extended playthroughs.

The highlight when playing their slot games is the fact that many of them come with Progressive Jackpots while others come with jackpots which offer big enough wins rivalling any other slots out there.

This platform is worth giving a try, especially as you can play their games for free before placing any real money bets on them.

Nucleus Gaming on the Go:

The games at Nucleus Gaming are designed for their mobile market hence being created in HTML5, rather than Flash making it easy to play on multiple platforms and operating systems. They have released a large number of slots which include 3D slots for mobile play, and they deliver a “true 3D cinematic experience.”

The value of mobile gaming is not lost on Nucleus Gaming as their website points out that 25% of US online users access the internet exclusively from their mobiles. Currently, there are over a billion smartphones in the world.

A Nucleus of 3D Slots:

3D Slots are this software providers Picasso. Their 3D Slots. Looking at them, you immediately see you are in for a treat. One of their latest releases is Spirit of the Nile featuring none other than the enigmatic Cleopatra.

Another winner by Nucleus Gaming was their earlier releases, End Zone Riches and here they combined players love for sports with sports and comes with 12 Big League Bonus spins and a Double Up Feature. Runs of Odin is another slot you have to try as it is unique in the sense which comes in a 7×7 format with falling reels and the graphics immerse you into the game that you can almost feel the torrents of water and bursts of flames. There is also the unique and unusual Jackpot slot Moguls Jackpot.

Nucleus Games also offers their fans a small selection of classic slots. However, it’s an area they do not quite excel in. There are a few that can be enjoyed by players who prefer the more traditional type of slot game and they are Jumbo Jeter, Savanna Safari and Super 7’s which are guaranteed to grab your attention from the onset.

It is evident that this software developer is continually adding to their gaming portfolio and have recently released a few new table games which include Three Card Rummy, American Blackjack, Red Dog and Pontoon.

Their Table Game selection is impressive and includes Single Deck Blackjack and Pontoon.

Nucleus Gaming has gone all out with their Video Poker, which is a nice change. Unlike some developers, they have not added it as an afterthought to the more traditional Card Games.

Players will be able to enjoy single Hand Video Poker which includes Jacks or Better, Split Way Royale and Deuces Wild as well as multi-hand Video Poker for those poker aficionados.

Nucleus Gaming is one of the newer software developers who are making a name for themselves in the online gambling world. Another advantage they have over the older developers by being one of the youngest in the industry is their software will be advanced and up to date. They have in their short lifespan managed to release over 100+ games which include 3D Slots, Classic Slots, Table Games and Video Poker, all very impressive for a newbie.