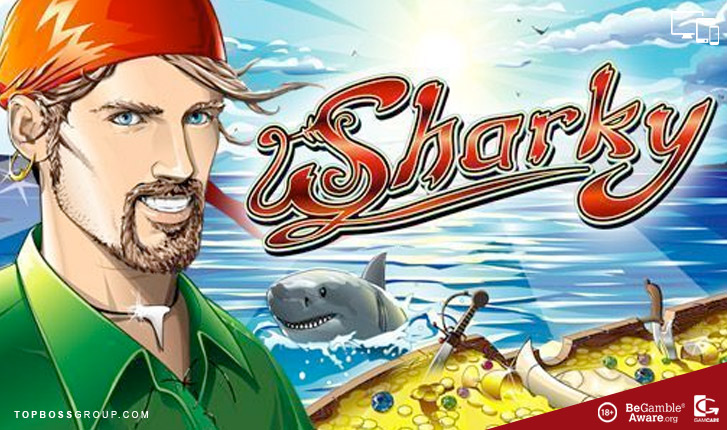 Sharky has been rated by our slots review team and scores an awesome 81% based from the category ratings overall.

Meet Sharky, no it’s not a fish but a Pirate. This pirate-themed 9 pay lines,5 reel Video Slot by Novomatic is full of treasures and filled with adventure.

The reels are set underwater with a rather ominous looking shark gliding along in a rather menacing manner at the top of the screen, avoid him as he will capsize your boat and help you along in meeting your maker.

All aboard and let’s set sail on a journey filled with plenty of rewards which can be reeled in.

The symbols in this game are in line with the pirate theme and are portrayed in realistic graphics. They invoke the feel of true pirate plundering and include Sharky the Pirate, a Treasure Chest, his loyal Parrot, Pirate Swords, the Compass, the Ship and an Island. There are also the standard lower value features being the 9,10, J, Q and K.

In this Video Slot the Scatter Symbols are depicted by a Compass, a Ship and an Island, the latter two are key to activating the Bonus.

Sharky the Pirate is the Wild symbol and substitutes for all the other symbols excluding the Compass, Ships and an Island. When you hit 5 Pirate symbols you will receive the top pay-out which is 500 000, that is if this spin was made with the maximum bet.

A Twist in the Tail:

The Bonus game in Sharky Slot is different from most of the other online slot games: To trigger the 10 Free games you must land two different symbols that being the Scatter Ship and the Beach.

Free games can be re-triggered should you land the scatters in the right place again.

There is another twist in the Free Game Bonus, a new symbol is introduced to the reels, the Pirate Row Boat. During your Free Games one Pirate Row Boat will be lowered onto the reel for every ship that appears, this serves as a Wild symbol. He will at random row across the reels turning symbols into Wilds until he is attacked by a Shark.

The Pirate Row boat cannot however turn the Compass, Beach or Ship into Wilds, furthermore should he evade a Shark attack and land up adjacent to the Treasure Ship in any direction you will win between 18 and 450 credits.

As with most slots Sharky also has the Gamble Feature and this can be played after each win in the hopes of doubling them by predicting the next cards correct colour.

To quadruple your winnings all you must do is choose the correct suit, just remember it’s a gamble and all could be lost.

Land Ahoy… the end of an Adventure! 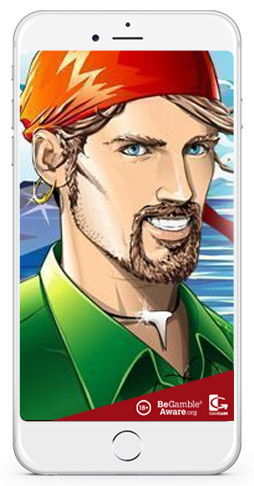