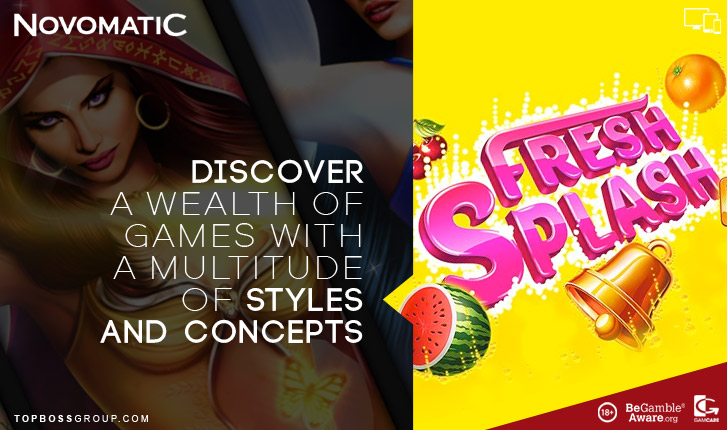 Our review team has rated Novomatic Casino Games on the categories below and Novomatic scores an awesome 89% ratings overall.

The Novomatic Group is an Austrian-based software company, one of the largest gaming technology companies in the world.
In 2011 Novomatic introduced online casino games through Greentube Internet Entertainment Solutions. Some of the games display the names Gaminator, Novoline or Novo Star. Novomatic offers high quality and popular casino games with fair payouts. Novomatic employs about 30,000 employees with locations in over 50 countries.

The Group also exports high-tech gaming equipment, system solutions, lottery system solutions and services to more than 75 states. They are also an operator of electronic and regular casinos, sports betting outlets and technology/service partner in the lottery segment.

Novomatic Group is a pioneer in the development of innovative products and systems solutions. The Novomatic Group continues to pursue a successful strategy of growth with core markets including the member states of the European Union, as well as Central, Eastern and South-Eastern Europe. The focus is on markets such as Asia, Latin America and the United States.

Novomatic frequently attends gaming conferences. In 2003, at the International Casino Expo, they set up the most prominent booth ever seen at a gaming show. It measured 4,500 square meters!

They were also the first company to implement a Europe-wide access system for AWP machine operations.

Novomatic has over 200 innovative games with various styles and concepts. The games offered also appear in a 3D and multiplayer format.

Greentube is the company that controls the online and mobile division of Novomatic, which is also known as Novomatic Interactive.

What Awards Has Novomatic Won?

Novomatic has won numerous awards, some of which include:

How did Novomatic Begin?

Novomatic was founded in 1980 by Professor Johann F. Graf who used to import pinball machines into Austria from Belgium.

The purpose of his company Novomatic was to manufacture and distribute gaming machines. Presently Mr Graf still owns the majority of the company which is now an organisation with a turnover in 2013 of €3.5 billion!

What type of Pokies and Games are on offer?

The Novomatic casino slots include the classic 3 Reel up to 25 Reel slots and multiple payline games. Novomatic games have a very distinct feel with vibrant card symbols and excellent 3D graphics. Most of the games feature outstanding Free Spins, Pick’Em games and Gamble Feature.

Some of their most popular and highly recommended slots include Royal Dynasty Slot, Pharaoh’s Ring, Magic Jester Slot and Lord of the Ocean.

A small video poker selection includes versions of Deuces Wild, Jacks or Better and Joker Poker. The table games are relatively few with the traditional Baccarat, Blackjack, Roulette and SicBo.

Novomatic games combine the classics with modern trends featuring unique storylines. The games have a simple interface with easy navigation, so even beginners can play with ease.

Sometimes we have noticed that Novomatic removes Slots from their portfolio. An example of this is Hoffmania Slot which just disappeared from the online casinos with no reason given.

Does Novomatic offer a Progressive Jackpot?

Multi-Level Mystery Jackpots include games such as:

The Magic Joker Jackpot™ Card Feature can trigger at random after each spin in the base game. The screen will expand displaying animated shuffling cards. One card is drawn, only the Joker card triggers the Magic Joker Jackpot.
Any other card ends the chance to enter the Jackpot game.

Does Novomatic have a Mobile Platform?

Novomatic Mobile gambling software has stunning graphics and animation. Furthermore, the software is compatible with iOS and Android.

Access the Top Novomatic Slots by downloading an app to smartphones and Tablets. The games are fully optimised and adjust to the size of the mobile screen. Furthermore, Touch technology allows players to tap or swipe the screen to get the reels spinning.