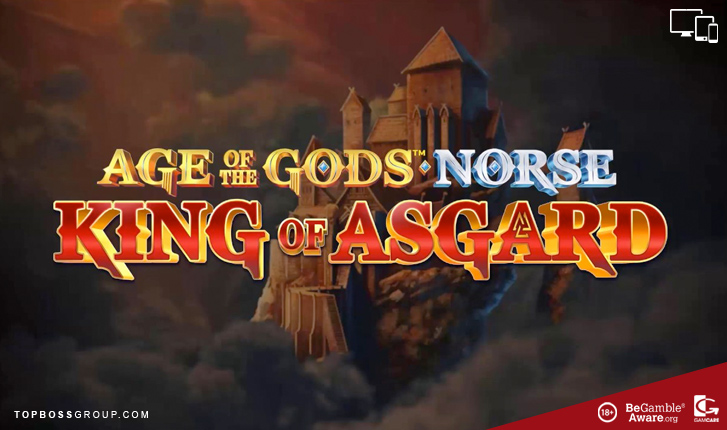 Age of the Gods Norse King of Asgard has been rated by our slots review team and scores an excellent 91% based from the category ratings overall.

Play Norse King of Asgard At These Top Rated Casinos

Start playing this slot and summon Odin, Loki, Frost Giants and Thor in this 6 reel, 50 pay lines slot as you head to the Kingdom of Asgard and collect some nice wins, possibly even hit one of the 2 Progressive Jackpots.

There are 2 Progressive Jackpots can be won randomly as you join Odin and Loki in a battle for Asgard. King of Asgard slot game is set high up in the heavens with the castle as the backdrop, making it another uniquely designed slot in this legendary series.

Enjoy a musical theme which adds more punch to the games adventure. Age of Gods Norse King of Asgard is also available in free play demo on mobile devices and desktops. Take on the Mighty Odin for your place in his majestic realm and walk away a victor.

When you are ready to start you game play you will choose your betting range by using the games plus and minus buttons. Selecting any of the available amounts will place bets across the 50 paylines. Consequently, minimum bet starts off at $0.10 per spin reaching a maximum of $500 per spin. Age of Gods Norse King of Asgard has an RTP of 96.67% with a low-medium variance.

Age of Gods Norse King of Asgard has a versatile set of symbols. High and royal cards have been replaced with Viking characters. High paying symbols on the other hand are depictions of deities and monsters.

Thor himself is the high paying symbol followed by Jotnar the Frost Giant. You will also encounter Fenrir who is Loki’s Wolf and his serpent Jormungadr

Middle tier symbols which consists of a sea monster and a pair of Ravens Huginn and Muninn who belong to Odin. Consequently, you need 2-6 matching high value symbols to win and 3-6 low value symbols. Below is the payable for 6 matching symbols:

Odin and Loki both act as the games Wild symbols with Odin appearing as a Stacked Wild.

In this feature Odin features as a Stacked Wild and when he lands fully stacked on reels 2 to 6 you trigger the games only bonus feature.

Your bonus feature is known as Odin’s Fury Re-Spins. This feature gives you re-spins where the Odin Stacked Wild is moving one step to the left on each spin. Therefore, the best place for Odin to land is reel 6 because of the Progressive Multiplier in play that increases by 1x for each re-spin.

Norse King of Asgard is part of the Age of Gods jackpot series and it comes with 2 different progressive jackpots that are triggered at random. The Daily Jackpot at some casinos may be mentioned as the: Extra Jackpot, the same principle applies.

First of all, the games maximum win is 400x your stake and that’s if you fill the screen with the highest paying symbols. Above all, remember the Odin’s Fury Re-spin feature could land you 5-10x higher than that so the Gods are shining upon you at all times.

Playtech’s Norse King of Asgard is another excellent addition to the legendary Age of Gods Series and Playtech has not disappointed. King of Asgard slot focuses around the re-spins feature with an added bonus of possibly winning one of the random jackpots. Overall, the battle between Loki and Odin makes this an entertaining and adventurous game with some nice wins and Multipliers. May the Gods be shining upon you as you spin those reels in this new Age of Gods slot game. 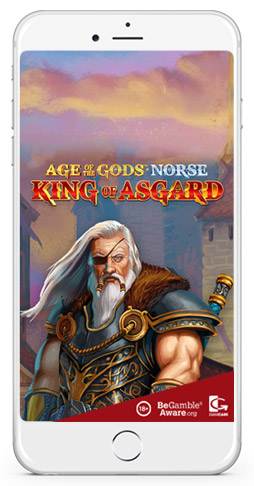