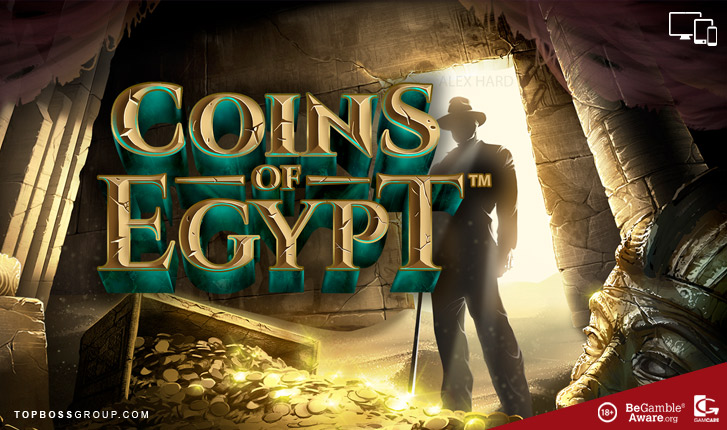 Coins Of Egypt has been rated by our slots review team and scores an awesome 80% based from the category ratings overall.

Play Coins Of Egypt At These Top Rated Casinos

Coins of Egypt is powered by the renowned software provider NetEnt and features 20 paylines, 5 reels and an amazing 3d graphic design

This particular slot has an Egyptian theme with a mysterious almost eerie feel to it as the two-ominous looking stone carved Gods loom on either side of the reels. It encompasses the typical scarabs, scorpions , mythological Gods Horus, Bastet, Wadjet and Anubis of this genre however with a modern feel to it enhanced by spectacular 3D graphics.

With features like Pharaoh Coins and wild symbols the cash just keeps rolling in, further to this are the games free spins bonus where impressive real cash prizes can be scored in this magical world of Ancient Egypt.

Here’s how to enter the land of the Pharaoh’s but before you do so decide on what amount you want to spend.

Gold Scarab is the Wild symbol in the Coins of Egypt slot and it can be a supernumerary for all the other symbols excluding the Scatter, Chest Seal and Collect Symbols. Winning combinations can be formed by Wilds and when it substitutes in a winning line.

All coins collected during a round are added to any winnings from the previous round regardless of the bet lines when a collect symbol lands on reel 5.

Free Spins can be awarded when you get 3 scatters anywhere on reels 1.3 and 5. The total value of coins available on the reels during the free spins round is added to each chest at the beginning of the feature.

An amount of up to 3 coins may appear on reels 1 -3 during each spin in Free Spins feature and if they appear they are added to each chest immediately.

Coins of Egypt has 3 chest seal symbols, Ruby Eagle Seal, Emerald Snake Seal and Golden Cat Seal and up to one Seal can be collected and added to its corresponding chest during each spin in Free Spins.

The Free Spins feature ends once the player has collected 3 identical seals by landing on reel 5, and the amount of coins collected during this game play will be awarded. Only one of the 3 chests can be won in Free Spins and this is after all3 seals of the same colour have been collected.

The Coins of Egypt Slot Paytable is very enticing as wins range between 5x to 1500x line bet and the scarab beetle wild symbol which is illuminated offers up to 3000x your line bet for matching five of a kind.

Once the reels start spinning players will find that the action is fast paced and immediate with the game’s first feature.
Three gold coins can pop up at any time on the first three reels each compromising of 2x to 5x your bet. Land of Pharaoh’s head on reel five and hit the big win which are all the prizes from the coins on each of the three reels and are not connected to paylines.

All the prizes are added to any win lines you decide to make on the same spin, adding to the thrill and excitement of outwitting the Gods.

Coins of Egypt Slot offers amazing graphics and a fitting soundtrack notwithstanding the fact that it offers players rewarding special features such as free spins, Golden Beetle Wild and an exceptional RTP of 96.97% 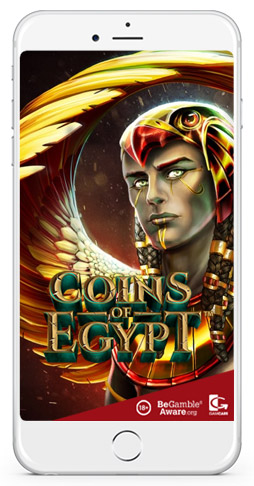