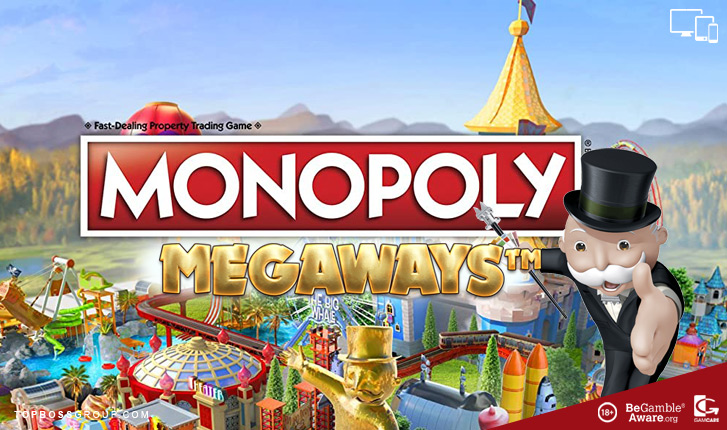 Monopoly Megaways has been rated by our slots review team and scores an excellent 87% based from the category ratings overall.

Monopoly is a game known to everybody, young and old and has brought joy to many families over the years. Finally, a developer has managed to adapt one of the world’s most famous board games into a Video Slot.

Big Time Gaming has the perfect mega ways engine for this Video slot that they released. Beneath the reels of Monopoly Megaways, you will see the Reel Adventure Board game. Mr Monopoly moves around on this board game when there is a win or Cascading Win. He collects the properties and utilities like a typical landlord. He also triggers features as he moves along, so he also gives, not only collects.

All the board game fans will love this slot.  Who, in its 100 years of existence has never played Monopoly and not had a nostalgic relationship with the boot, top hat or dog. This time the stakes are higher than before because you will be playing for real money and could win up to 15000x your bet.

Betting starts at $0.10 going to a maximum of $40, which is higher than usual when it comes to a Megaways slot game. Monopoly Megaways is a high variance slot with an RTP of 96.50%.

When you start playing Monopoly Megaways Video slot, you will be taken back to your childhood when you see the symbols. They are the iconic board game playing pieces, and they all appear in gold.

The Top Hat is the most valuable symbol and only pays out when you land two identical symbols whereas with all the other symbols you need to land 3 to 6 symbols to receive a playout. Below is the paytable for landing six identical symbols

The White M is Monopoly Megaways Wild Symbol and substitutes for all, the other symbols.

The Cascading Reels Feature, in conjunction with the Megaways engine, ensures that every spin is unique in the base game. Winning symbols get removed, and new symbols drop down from above to replace them. When this happens, there is considerable potential for more wins per spin.

When playing Monopoly Megaways, you will see a stretch of the board game below the reels and sense a feeling of nostalgia. The main attraction here is the Reel Adventure Bonus Feature. This feature moves Mr Monopoly around the board game after each win, and every square he lands on will give you a different bonus feature. Here is what you have in store for you.

Land on Go and the next spin plays out on the games maximum megaways, 117649 pay lines.

If you land on the Community Chest and you will go to a random property with up to 4 houses added.

Land on Chance and you will be sent to a random street and receive 1 to 4 houses, or you could trigger the bonus round or 117649 pay lines for the next round.

Land on utilities or Train Stations for the first time and you become the proud owner thereof. Spins and Multipliers get added during the bonus round.

Should you land on properties on consecutive wins, new houses get added to them.

The Free Spins Feature is triggered when you have five houses on any of your given properties. Initially, you receive 8 Free Spins per default. However, should you have more than five houses you will receive extra spins; this also applies to the train stations.

Trigger the Free Spins feature a second time, and you will receive three extra Free Spins.

During the Free Spins Feature, an increasing multiplier is in play. It starts at 1x and increases by 1x for every utility you own.

When the Free Spins Feature has played out, the Progressive Multiplier increases for every house that gets added. Landing on a Train Station owned by you sees you getting one extra Free Spin. Should you land on a utility, the Multiplier will increase.

Big Time Gaming has done a tremendous job with Monopoly Megaways slot. The visuals are exceptional as they bring the board game to life. Moreover, the incorporation of the board game on the reels, to the extra features. There are massive payouts to be had in Monopoly Megaways with wins up to 15000 x your bet. Play with the highest bet of $40, and you could see yourself walking away with $600 000 on a single spin. Now that’s what you call a Property Mogul. 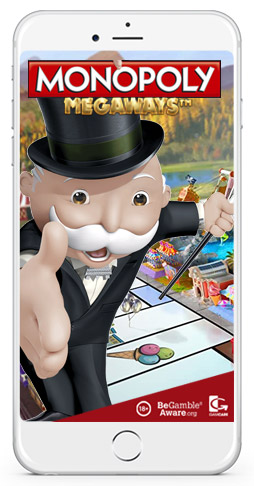