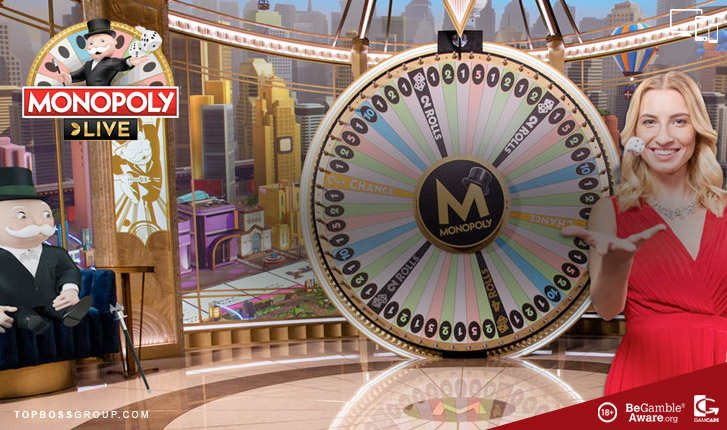 Monopoly Live has been rated by our slots review team and scores an excellent 86% based from the category ratings overall.

Evolution Gaming, the world-renowned live casino provider, has once again produced a winner with their Monopoly Live. It’s a follow up on their viral money wheel game, Dream Catcher. Monopoly Live is visually captivating and comes with a super Bonus game and winnings going as high as 10000x your bet.

The excitement of Monopoly Live lies in the 3D Bonus Round and to get into this Bonus Round you will need to place bets on 2 Rolls or 4 Rolls. This bonus game is an unforgettable experience, and the original game of Monopoly inspires the game.

Monopoly Live is a perfect combination of live games and virtual reality, and it simply should not be missed as its engrossing and fully immersive set in a luxuriously decorated studio with an eloquent game host.

Wagering on Live Monopoly varies between $0.10 – $5000. Bets in Monopoly Live can be placed on all outcomes, plus players have the option to double their wagers. The games RTP on specific bets are relatively low, and it varies between 91.30% -96.23%.

Monopoly Live is a tad different from the well-known game of Monopoly. The rules of Monopoly Live are simple, and the main feature in the game is the Wheel of Fortune that is similar to the one in Live Dream Catcher.

The Wheel has several segments on it, and they are marked 1, 2,5,10, 2 Rolls and 4 Rolls. Once players have placed their bets, the game host spins the Wheel. If you are lucky and it lands on numbers you have selected payouts will be per the corresponding number/s you have bet on. So let’s say you bet on number 10 then your payout will be 10x your bet.

Monopoly Live has some superior offerings in its Virtual Bonus Games. If the wheel stops on Chance, 2 Rolls or 4 Rolls then you trigger the Bonus Game

Mr Monopoly appears brandishing a card that will reward players with either a random cash prize or a Multiplier Bonus. Should you win the Multiplier Bonus, the game host spins the Wheel to see what Multiplier will be applied. Should Lady Luck be on your side and the Multiplier is once again landed it is too multiplied.

If you bet on the Rolls and the Wheel stops there players then enter the 3D Bonus Game. The 3D Bonus Game is an augmented virtual reality game board which include all the popular features found in the traditional game of Monopoly. They are Community Chest, go, houses and hotels. During this feature, Mr Monopoly walks around collecting multipliers of between 100x to 500x along with cash prizes ensuring his players walk away winners.

Evolution Gaming has once again produced a superb Live Casino game adding a touch of virtual reality. The graphics are outstanding, and the highlight of the game is Mr Monopoly himself, who is entirely incorporated into the game. It’s a must for all live online enthusiasts besides its multipliers, and cash prizes its betting range is affordable to all players.

6 Tips for Playing at Online Casinos