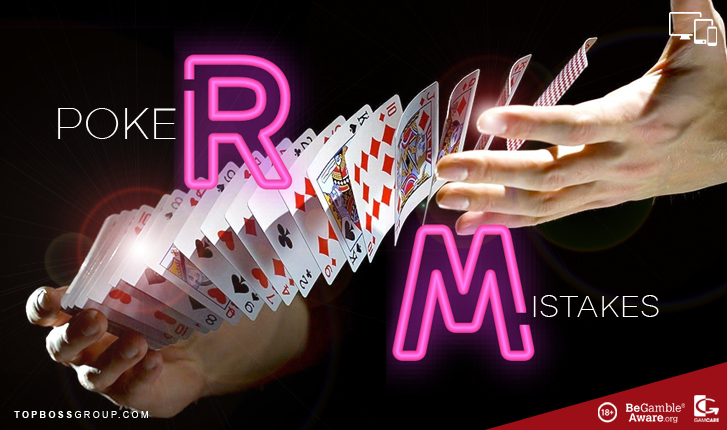 In this article, we explore the mistakes poker players make.

Whenever a poker mistake gets made, you could lose money. Whether you play a hand differently if you could see the hole cards of your opponents, or you make a move on negative EV, you make a mistake.

Some of these poker mistakes can cost you your entire bankroll, though most of them are small ones costing you a small part of your stack at a time.

Interestingly enough, the most dangerous mistakes you can make are not the big ones. The small ones are much more frequent, players are a lot less likely to catch on, and in the long-run, these small mistakes are bound to cost a lot more than a big one.

A great example, in this sense, would be Rakeback.

That’s right if you do not sign up for a rake rebate deal you commit a mistake which will come back to haunt you on every single real money hand that you play.

Rakeback is an edge which generates money on your every hand. Giving up an advantage like that is contrary to the fundamental theorem of winning poker. By playing without rake back, you might still make money, but the money that you give up will pile up and depending on the volume of your play can reach thousands of dollars a month.

Other mistakes which chip away at your bankroll like that are committed by rookies all the time.

Some of them play too many hands, and chase coin-flips, others overplay their hands all the time. Still, others fail to make the most of their good hands.

Players are ready to put their entire stack on the line on a coin flip, on account of the tournament play they see on TV and the wrong conclusions they draw from it. In televised tournaments, the sight of players shoving all in on coin flips is something that comes about all the time. However, those players get pressured into taking desperate measures by a variety of factors, among which the escalating blinds are present too.

You can’t just take that and apply it to your cash games. If so, you’re pretty much guaranteed to reach the felt extremely fast that way. Not only is this approach faulty from a practical perspective, but mathematics proves it wrong too.
In a tournament, the escalating blinds don’t just put constant pressure on players; they alter the pot odds favourably too.

If its the closing stages of an MTT, the blinds are so big that it becomes a mathematically correct decision to shove on just about any hand. In cash games, there are no escalating blinds, and there are no improved pot odds or increasing pressure either. That means such “spectacular” tournament antics shouldn’t be in your play.

Holding an A. K in a Tournament

Your starting hand values should be different in a cash game, which means you shouldn’t be in a hurry to call someone’s all-in when you’re holding A, K for instance.

While in a tournament an A, K is a monster, (especially so in the late stages) in a cash game you’ll be putting your stack on the line on nothing more than a coin-flip.

Those who know how to generate money at cash tables will not shove all-in unless they have a pair or at least an A, K, which means your A, K will not precisely hold EV+ in this situation.

Don’t risk your stack on coin flips, and make sure you do not overplay hands you deem strong either.

There are quite a few tricky hands which appear extremely strong for a beginner (like flopping two low pairs on a board which has a Q, K or A on it) yet have a significant potential for extremely nasty surprises.