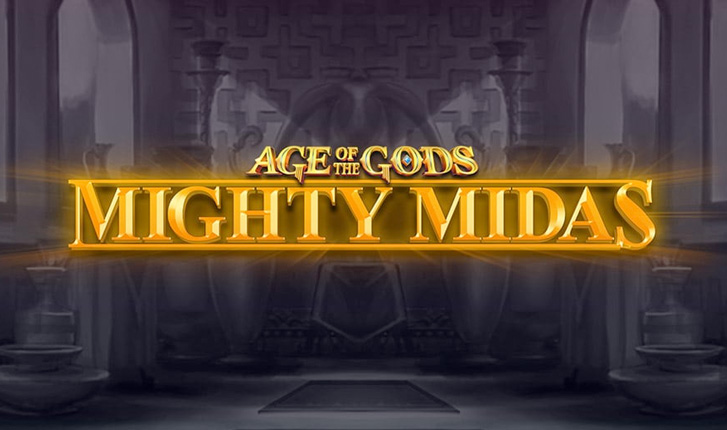 Age of the Gods - Mighty Midas has been rated by our slots review team and scores an awesome 83% based from the category ratings overall.

This slot depicts the myth surrounding King Midas and a very apt name for a slot game might I add as it implies that everything you touch could turn to Gold, but don’t be fooled as it could to be a curse, just as it was to King Midas when he touched his daughter and she changed to Gold.

Set in a picturesque golden throne room with epic cinematic themed music playing in the background this high volatility game filled with a treasure of bonuses can also be played for free.

Midas is the main feature and top payer in this slot game, he will reward you with a jackpot worth 500x your line bet for five of a kind. We then have the party goer who pays out 25-400x for three or more of a kind and the Satyr Silenus 20-300x, while Dionysus himself pays 10-150x and finally Midas’s daughter who will payout 15-200x

We then have the low paying symbols, and these are all things Midas touched and turned to gold. We have the  Chicken which pays 5-125x, the rose and apple 5-100x and the goblet and grapes, these payout 5-75x.

We all know King Midas has the Golden Touch, and in this game, he can turn symbols Wild so keep your eye out for the Golden Hand symbol.

When the Golden Hand symbol lands on reels 3,4 or 5 it will point to a symbol on its left, and that symbol placed elsewhere on the reels will immediately turn into a Golden Wild. As you from experience know, Wilds replace all symbols in the game apart from the Scatters which remain unchanged.

The Wilds collapse to allow symbols from above to fall into their allocated positions, in addition the Midas Touch symbol could appear and point to a Golden Wild and when this occurs the Golden Wild will become 2x Golden Wild with added multipliers.

Free Spins are always a favourite and Age of the Gods- Mighty Midas has them. Free Spins can be won by hitting the multi-coloured scatter on reels 1 and 5 and one of five special bonuses will be triggered.

The first one is the Emerald Bonus, this awards real cash and a prize multiplier, the Ruby Spins on the other hand make use of Golden Wilds, meaning that whenever a Golden Wild appears in this round it becomes a Multiplier Wild using a unique Multiplier Tower which range between 5x and 25x.

The Amber Spins is where one symbol is chosen randomly to become a Golden Wild and then we have the Sapphire Spins, this is a great feature especially for the player who enjoys Wilds. During the Sapphire Spin round, you could receive up to 65 extra Wilds to enjoy Free Spins. Finally, we have the Amethyst Spins, here all Midas Touch symbols appear in double stacks meaning there are some great prizes in store for you.

In Age of the Gods – Mighty Midas the jackpot game is triggered at random, and by entering the game you are guaranteed one of the prizes on offer. Select gold coins from the 20 available to you on the screen and they will automatically flip over to reveal a jackpot amount, should you match three of the same colours the corresponding prize jackpot is yours! 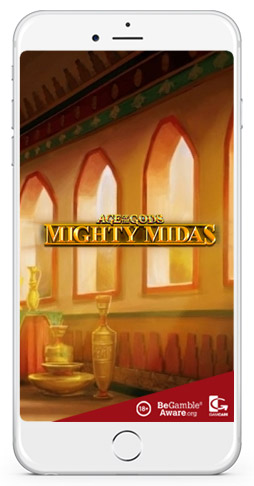