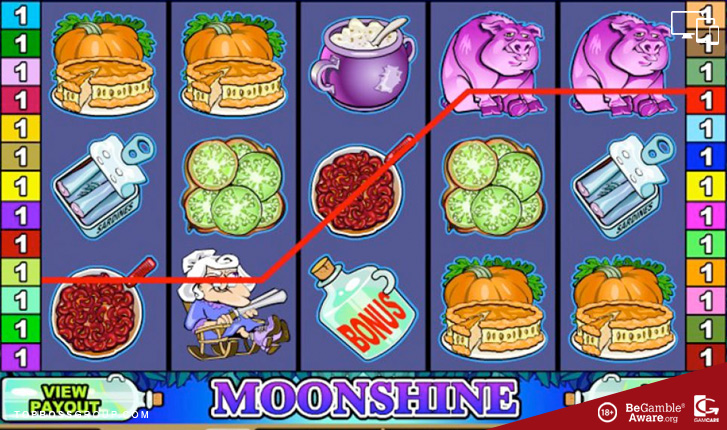 Moonshine has been rated by our slots review team and scores an awesome 85% based from the category ratings overall.

How To Play Moonshine Slot

This extremely humorous Video slot by Microgaming comes with 5 reels and an adjustable 25 pay line.

Set in the infamous prohibition era when the US decided to ban alcohol, allowing criminals to thrive by distributing and selling illicit alcohol. As you can guess Moonshine became the most popular of all alcohol sold during this era due to its potency, one can say it packed plenty of punch.

This game is set in the steamy swamps of the deep South where tobacco chewing Hillbillies lurk, and Grandma’s sit on their rocking chairs keeping watch and ready to blow any trespasser away all adding authenticity to the ominous goings on in the Swamps whilst the insect sounds ironically create a sense of serenity.

The game is cartoon based hence adding some flippancy to the theme with different characters on the reels such as the Hillbilly playing his Banjo, the old lady in her rocking chair with a double-barrelled shotgun, the old man puffing away on his pipe, kiwis, pigs, sardines and the Moonshine of course.

Adding more flavour to the game is the fact that each symbol has its own colour scheme which certainly enhances them as they do stand out exceptionally well. There is no background to the reels in the base game, the space is taken up by the beautifully defined reels.

Another twist is the fact that Moonshine slot does not have the low value symbols 10, j, k or Q which is against the norm, they do however have lower paying symbols such as Sardines, Peppers and Pumpkins spicing up the game which has clearly paid off, accolades to Microgaming.

Moonshines betting range caters for everybody with a minimum of 1 coin per pay line and a max of 5 coins per line. The minimum coin size is 0.01 with a maximum of 1. This Video Slots RTP is 95.96%.

Granny in a rocking is the games Wild symbol and it can substitute for all symbols in the game excluding the Scatter and Bonus Symbols. If the moon is shining down on you and you hit of these on any active pay-line you will win 8000 rocking coins.

A Scatter of Law:

The Southern Sheriff and Alcohol Jug are the Scatter Symbols and can form scatter wins. These scatter wins are in turn multiplied by the total bet and are added to the pay lines, now is that not worth a law worth breaking for?

A Jug full of Moonshine Bonuses:

The Glass Alcohol Jug is the bonus symbol and landing 5 or more of this symbol will get the reels spinning onto the Moonshine Bonus Feature.

This is only the start of your shining rewards once triggered you will be able to open tiles on the grid and continue doing so until you uncover the “Start Free Spins Feature”. When this happens all your spins and multipliers will be revealed, added together and then it’s time to get those reels spinning

You are Under the Influence:

This Microgaming Video slot can pull you into the illegal world of the Prohibition era. It’s fun to play, has humorous characters and banjo music playing in the background whilst the wins are being dished out creating that Southern ambiance.

150Chanceswhen you make a first deposit of CA$10 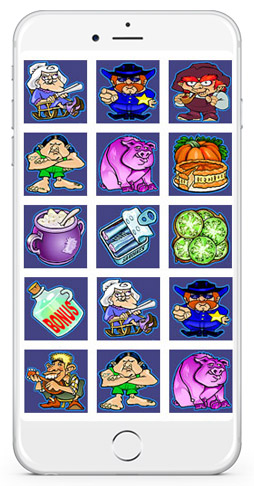