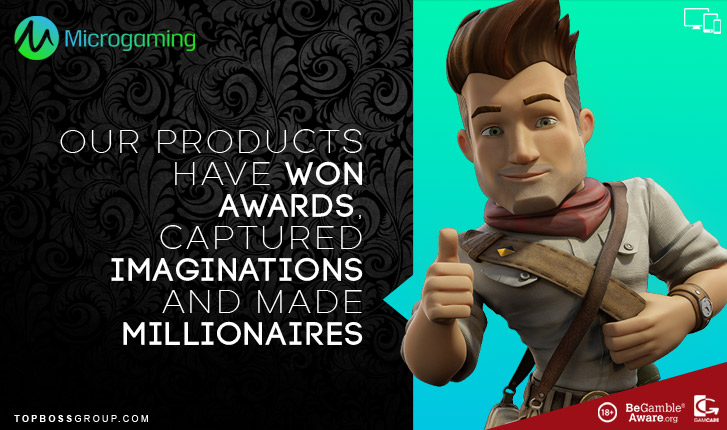 Our review team has rated Microgaming Casino Games on the categories below and Microgaming scores an awesome 94% ratings overall.

Situated on the Isle of Man within walking distance of Douglas Promenade, the towering head office was officially opened on 31 July 2017.

Microgaming features an unbeatable range of epic games and branded blockbusters. New games are launched every month across desktop and mobile platforms. Not many software developers can compare to the sheer level of high quality and quantity.

The Company will be working with new independent game studios on an exclusive basis, the first being Triple Edge Studios. This technology embraces new and original ways to bring more choices and the very best innovative gaming experiences. Games released under Triple Edge include Playboy™ Gold and Halloween®.

Microgaming is a founding member of eCOGRA (e-Commerce Online Gaming Regulation and Assurance), which sets the standard in fair and responsible gaming.

They also give back to their local community by tackling important issues such as health, education and sports through their CSR initiative, Microgaming PlayItForward.

One of Microgaming’s most hotly anticipated releases this year is bringing the thunder with the return of everyone’s favourite Norse hero in Thunderstruck® Wild Lightning (27 July). This 40-line slot features wild multipliers, free spins and Microgaming’s Link&Win™ mechanic, plus an atmospheric original soundtrack to immerse players into Thor’s quest for the lost stones. Players can trigger one of five free spins features, and collecting 20 scatter pairs in the base game unlocks the WildStorm feature for the next free spins selection, turning up to five reels wild on a single spin.

Setting the reels ablaze at the end of July, we have 9 Blazing Diamonds WowPot (29 July) featuring the Wowpot jackpot, which has paid out more than 1.5 million wins to date and a top prize of €17,529,047.11. The Blazing Wheel makes another appearance with a twist, offering players the chance to win either free spins with a multiplier or a WowPot jackpot tier win!

Taking a dive into Atlantis, we have Royal League Neptune’s Harem (26 July), which includes free spins, multipliers and the randomly triggered Royal League feature. Players are taken on an underwater adventure to roll two lucky dice in the Royal League feature that will link to a board of 49 squares, giving a multiplier that could reach up to 10,000x a player’s bet.

Enter the opulent world of international superstar Dita Von Teese™ in Burlesque by Dita™ (22 July). This glittering slot is based on the burlesque performer’s lavishly spectacular cabarets. Experience the Wild Pleasure feature in the base game, and choose from four show-stopping free spins experiences, each based on one of Dita’s signature acts.

We’re heading back to the mysterious Land of Oz with Legacy of Oz (20 July). The mystic golden book returns and triggers up to 20 free spins and up to 20 more free spins in the feature itself. If players want to try their luck to complete near wins, the Hyperspins™ feature lets them respin reels at a cost and even adjust their bet before respinning.

How Many Games does Microgaming Have?

Microgaming has developed over 600 casino games; more than 300 are online slots. They release up to 4 new online slots every month and their slots are available in over 120 online casinos and about 40 of the most successful and well-known Poker rooms make use of their software.

The Microgaming slots stand out for their massive jackpots, detailed graphics and exhilarating themes.

What Awards Has Microgaming Won?

Microgaming has won numerous awards some of which include:

How did Microgaming Begin?

Microgaming was established in 1994 by launching their first online casino, Gaming Club. At that time most people did not have internet connection in their homes but the company persevered knowing it was onto something big!

In 1998, Microgaming launched a slot called Cash Splash, which was the first game to have a progressive jackpot! A portion of each spin would be placed into a pooled jackpot that could only be triggered when a specific combination appeared on the wheel. This new innovation allowed Microgaming to secure some of the largest gaming clients worldwide.

Microgaming Casinos released their Viper software in 2002 which took the company to even greater heights.

In 2005 Microgaming released the first co-branded trend-setting slot game, Tomb Raider. The game contained graphics from the popular comic book and movies. By 2008 Microgaming had reached several milestones, one being the first company to launch an online slot with 100 Paylines! Soon after, they set a world record when one of their progressive jackpots hit over 10 Million USD.

Microgaming Slots also released a brand new feature, My Slot which had never been seen before. My Slot gave players the option to upload their own graphics into the software, meaning that they could personalize the game however they desired.

In the early 2000s, Microgaming began developing other gaming software such as the Microgaming Poker Network, and Bingo software.

With the introduction of the Unlawful Internet Gaming Enforcement Act in 2006, the management of Microgaming decided not to risk the future of the company by remaining in the market. With that difficult decision, they closed their USA business.

Microgaming continuously releases new top-notch games with the most modern and technological advances in the industry.

What type of Microgaming Slots and Games are offered?

Microgaming has a saying: ‘Our games are made to be Played….’ These games include imaginative creations and some of the best names in entertainment.

Microgaming offers the biggest and most diverse portfolio of casino games in the industry. They have a huge selection of casino games such as Blackjack, Baccarat and Poker.

The different types of slots include classic slots, video slots and some fruit machine games. The slots feature a variety of creative themes, 3 and 5 Reels and differing pay lines. There are also multi-player games that bring an additional element of social interaction. Also included are tournaments and community games.

Microgaming hosts some of the biggest branded names, from Terminator 2™, Jurassic World™ to Lara Croft: Tomb Raider™ Game of Thrones™, and Playboy™ Gold. The in-house production team has also created some of their most successful games including Avalon, Dragonz, Hot as Hades, Immortal Romance and Thunderstruck.

Microgaming provides their software in most forms which include no-download, download, live, and mobile.

Does Microgaming offer a Progressive Jackpot?

The Microgaming progressive jackpot network is the largest in the world! In 2015, they set the Guinness World Record title:
‘Largest Jackpot Payout in an Online Slot Machine Game’ when a UK Betway player won the GBP equivalent of €17,879,645.12 from a 25p spin! Microgaming continues to offer the biggest progressive jackpot prizes with top-rated slots like Mega Moolah. The prizes aren’t confined to the slots; jackpots are also available on the various table games at all leading Microgaming casinos.

Does Microgaming have a Mobile Platform?

Microgaming entered the mobile gambling platform in 2004 and is one of the world’s leading suppliers of mobile gambling solutions. The mobile version operates from the older to the latest modern Tablets and Smartphones such as Apple, Android and BlackBerry.

The mobile games are compatible with the cutting edge HTML5 gaming platform. This technology offers excellent quality with clear audio and rich, sharp graphics. The HTML5 mobile casinos use swipe and tap technology, enabling quick and easy navigation. They still offer a number of games that are compatible with older mobile devices that run on the HTML4 platform. There are also mobile games available for devices still using Java.

Microgaming created GameWire, which offers safe and secure transactions for mobile gaming. All sensitive data is encrypted using various standard protocols before it is stored in a database.

Reel Strike Slot Hooking Up The Big One