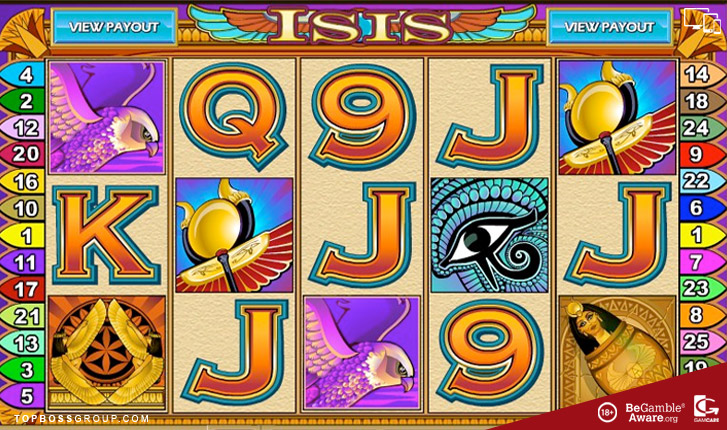 Isis has been rated by our slots review team and scores an awesome 77% based from the category ratings overall.

Isis the Egyptian Goddess of health, wisdom and marriage who has given her name to this Egyptian themed slot. This Video slot by Microgaming is based on ancient Egyptian mythology, one of the wealthiest civilizations during that era.

The graphics on this game are rich and almost magical as if Isis is coming to life and beckoning us to get those reels spinning. The screen is enveloped in beautiful pastel shades with Egyptian inspired motives such a palm leaves and various abstract figures.

This Video slot is played on 5 reels with three symbols on each. The 25 paylines is where you need to line up symbols in order to win prizes throughout the game. Wagers and paylines can be adjusted by activating the command bar below the reels. You can always increase the size of future rewards by betting at the beginning of each turn.

The player who enjoys the thrill of chance can try the optional guessing game after each win which can lead to you doubling or even quadrupling your most recent reward.

For the high rollers there is the max bet option where it’s all in on the next spin with the risk of losing everything at the hope of hitting the jackpot.

The Purple Hawk/Horus symbol is the scatter and pays in any position on the reels, added to the cash prizes the eagle symbol brings, it can also trigger up to 30 Free Spins which have multipliers attached to every win.

Free Spins can be won by landing at least three of the hawk scatter symbols anywhere on the reels.

The best part of this feature is the fact that this feature can be re-triggered by landing three more scatters again and each win you land is subject to a 6x multiplier.

Players can also enjoy the benefit of the Autoplay feature where you can enjoy watching the reels spin automatically whilst their winnings pile up in the credit total.

Classic patterns are followed in Isis Slot, and has a two part paytable and the two symbol groups are as follows:

Introducing the Goddess and Win the Jackpot:

The Wild card is Isis herself and she is powerful in the sense that she replaces all other symbols and assists you in achieving more winning combinations, when Isis is used she doubles the value of each combination.

This Wild card combinations can reach values of up to 10000 times the value of your initial bet, so keep an eye out for this magnificent Goddess. 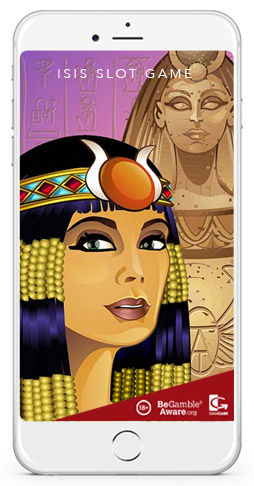