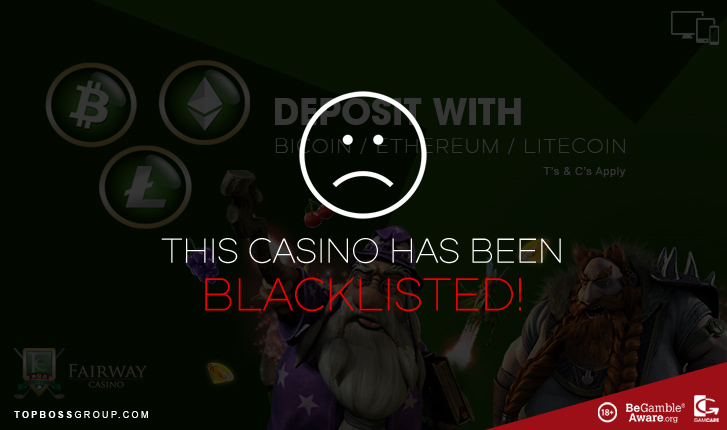 Fairway Casino a Beach of a Casino:

Fairway Casino is based in Costa Rica, home to some of the most magnificent beaches in the world.
They are a Live Dealer Casino one of the few around and their games are played on real casino tables by highly trained and supervised croupiers.

The latest in card readers and video technology is used to ensure their players experience the real deal from an online casino.

They take security very seriously and ensure their players personal and private information is transferred using the latest encryption technologies and when it has been stored on the servers it is maintained by the latest in firewall technology.

Fairway also believes in rewarding their loyal customers with some amazing prizes and bonuses. Their VIP loyalty program has various tiers, Bronze, Silver, Gold and Platinum, so the more you play the higher up the ladder you go and the bigger the rewards are.

Service is a winner in all businesses, and Fairway Casino assure all their players, that the turnaround for responses is within 4 hours, furthermore they have a multi-lingual support team which is also a bonus.
Crypto currencies can also be used to play at this live online casino, bitcoin, Ethereum and Litecoin are accepted and processed faster than any other deposits.

Fairway Casino also offer Progressive Live Tournaments where players can win substantial amounts if placed in the top three, thereafter each player as placed is rewarded with smaller amounts because at Fairway everybody is a winner.

At Fairway their way is the Fair Way so why not register and play.

The Fair Way to a Live Dealer Casino:

This Roulette game is different from others as it only has one single zero number and the numbers 1-36 totaling 37 numbers, whereas American Roulette has an additional double zero slot totaling 38 numbers.
French Roulette is very similar to European Roulette also having only a single zero however has the La Partage rule which distinguishes the game from European Roulette.

In European Roulette the numbers 1-36 vacillate between the red and black colours except for the single zero, that is green.

This is form of Blackjack is exclusive to Fairway Casino and has been patented by them. It allows players to virtually sit at the same table and pays out over 99%.

Main Features of The Game:

Players have the choice of betting on one, two or all three hands each time, it is a fast and consistent game and no player will at any time be affected by another player’s poor decision. Players can follow the basic Strategy decision, HIT/STAND/DOUBLE or SPLIT on each hand they have bet on or choose an alternative option.

The most appealing feature of this game is that each time a player’s hand changes he/she will be offered an Early Payout amount, meaning this is the amount of money that can be taken to end the hand before any more cards are dealt.

There are two side bet options, PAIRS and RUMMY.

This game is considered an opulent high limits card game of chance where eight decks of cards are used.
In Live Baccarat all the face cards as well as the 10’s have no value, the aces through nine are counted on their face value, meaning aces value is one.

Players have a choice of three different betting options or tags:

Players can bet on any of the three options, the aim of the game is to reach 9 points.

The Following rule applies should the players hand not take a third card.

Once the croupier has followed through on the above rule with both the Bank and the Player, the winning hand will be the closest to 9.