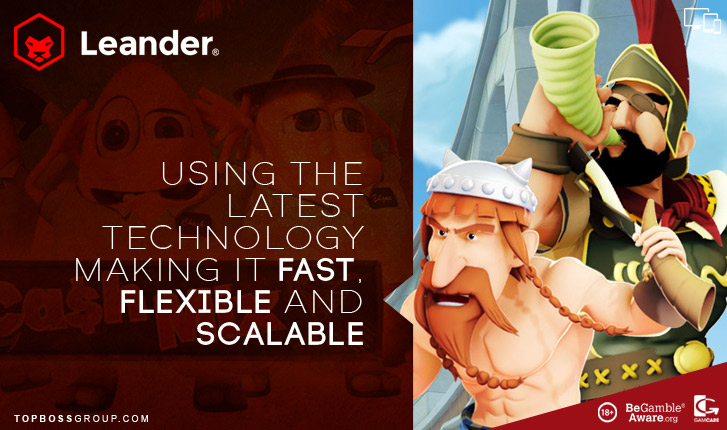 Our review team has rated Leander Casino Games on the categories below and Leander scores a great 71% ratings overall.

Leander Games studio creates high quality video slots with innovative concepts combined with top quality art and balanced mathematics.  ‘Leander Games’ is the trading name of Xterra Games Ltd, which is a company registered in Nassau, Bahamas. They have offices in Miami, Bahamas, Buenos Aires and the UK. They are an independent company providing innovative game content.

Deals have been made with some top game providers in the industry which allows them to use certain game development technology. This allows them to expand their library by introducing other games into their outstanding portfolio.

They have also developed the ‘LeGa’ Remote Gaming Server (RGS). This provides casinos with a platform to offer in-house and third-party games. ‘LeGa’ was developed using the latest technology which makes it fast, flexible and scalable.

Available in more than 30 languages, various currencies and hosted in multiple locations. Leander also has an increasing number of Operator’s and Game Partners integrated to their ‘LeGa’Remote Gaming Server. They have  recently expanded into the North American market after signing a distribution deal with Pala Interactive LLC.

How Many Games does Leander Games Have?

How did Leander Games Begin?

Leander was established in 2008 in Buenos Aires, Argentina by a trio of former business leaders and game designers. The company conquered the online gambling market by developing high quality casino games which can now be found at many of the popular online casinos.

The founders of Leander Games made the company successful through many years of hard work and dedication:

CEO – Steven Matsell has worked in Online Gaming since 2005 and has a wealth of knowledge about casino products and game aggregation. Steven invested and joined Leander in October 2012 to help accelerate the growth of the business.

COO – Ramiro Atucha is a founder of Leander Games.
Ramiro is responsible for building production capability and development and has built business relations in the US and Europe. He has also closed agreements with large online gaming companies.

CTO – Marcelo Blanco is also a founder of Leander Games.
Marcelo designed the ‘LeGa’ Platform and is responsible for the direct integrations.
He manages all third party and in-house content delivered to ‘LeGa’.

Leander Games focuses on video slot games which include the unique Reely games:

Bingo, Poker and Roulette – which are all based on popular table games.

Some of their games are Alice Cooper, Zombie Rush Slot, Apollo God of the Sun, Cash Mix, Scrooge’s Jackpot, 3 Elements and 777 Wild Vegas.

They also offer branded titles such as ‘Dolly’ which depicts the career of Dolly Parton. Megadeth is based on the American heavy metal band.

Some of the games include a Progressive Jackpot such as Apollo God of the Sun, Dragon Slot Jackpot and The Scrooge.

Does Leander Games have a Mobile Platform?

The games are designed with Flash and HTML5 technology which makes them available on smartphones such as Android, i-Phone and Windows Phone.