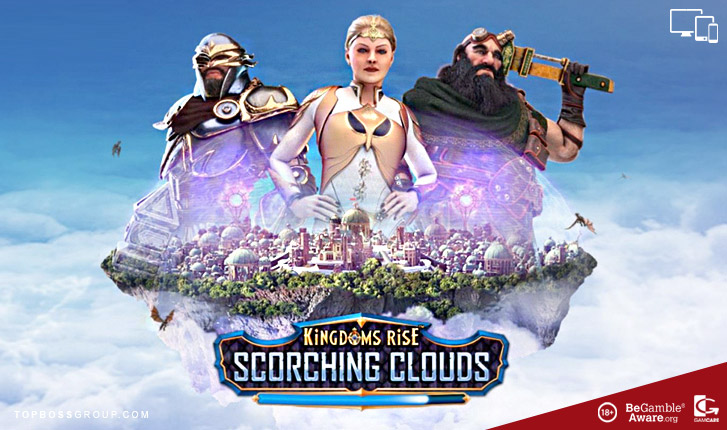 Kingdoms Rise Scorching Clouds has been rated by our slots review team and scores an awesome 80% based from the category ratings overall.

Kingdoms Rise: Scorching Clouds is another addition in the Jackpot series by Playtech. This slot game is filled with a ton of exciting features, three Progressive Jackpots and the theme has a Steampunk vibe where one could say Science Fiction meets Norse Mythology.

Players are in for the ride of their lives when they play Kingdoms Rise Scorching Cloud. Here you will go on a skybound ride with the Empress, her Knight and Engineer as she chases down Dragons.

The slot features a 5×5 grid of glowing gems, realistic characters and decorative hammers, as well as carved dragons that surround the grid. There is also an energy shield that lights up as the reels spin, all of which come to life perfectly across desktop and mobile platforms.

Be on the lookout for gold coins overlaying any of the symbols because these can be collected and used in the Virtual Rise of Kingdoms shops to purchase extra features.

Getting started, you will have to place a minimum bet of $0.10 with the maximum being $2000 in this medium to high volatility slot. Kingdoms Rise Scorching Cloud has an RTP of 96.50%.

In this slot game, the low-value symbols are different coloured gemstones. The highest paying symbol is the Empress and to win anything; you need to land at least four matching symbols in a cluster. Herewith the paytable of the game for 10+ in a cluster is:

The Golden Ships wheel is the games Wild Symbol and were possible substitutes to create extra clusters.

This feature is triggered when you land a Wild in the lit-up area within the grid. Two to four Wilds will be randomly added to the reels. The Spreading Wilds Bonus feature only ends when there are no further winning clusters or Wilds that land in the highlighted area on the grid.

Be on the lookout for Dragon Eggs which are the games collectable symbols. They leave wilds in their wake because collecting 6 Dragon Eggs will reward you with 6 Re-Spins. When this occurs, the usual Cascading Wins Feature is then inverted. What this means is the winning clusters remain on the grid while all the other symbols are removed and replaced by new symbols.

The Re-Spins Features ends when you run out of Dragons Eggs.

In Kingdoms Rise: Scorching Clouds there are two Free Spin Features, and both are triggered when you land at least 3 Scatter Symbols anywhere on the same spin. Players then get to choose between the Empress Free Spins Bonus Round or the Knight Free Bonus Round.

The Empress Bonus Round

This Bonus Round is high volatility and players receive between 5-7 Free Spins when you land 3, 4 or 5 Scatter Symbols respectively. Landing a hammer, telescope or wrench next to the Empress symbol will see them transform into high-value Empress Symbols which in turn adds to forming some high paying winning clusters.

The Knight Bonus Round

The Knight Bonus Round is a medium volatility option and players receive 8, 10 or 12 Free Spins when you land 3, 4 or 5 Scatter Symbols respectively. Landing a Hammer symbol next to the Knight will transform the Knight symbol. In this feature, you cannot land the Empress or Engineer symbol.

This slot game is part of the Kingdoms Rise Progressive Jackpot Network. The Jackpots can be won randomly on any spin. Playing higher stakes can increase your chances of winning any one of the three progressive jackpots, which are:

Kingdoms Rise: Scorching Clouds is a scorching new release by Playtech. It is well designed and comes with a ton of features keeping players well entertained with its Inverted Cascading Win RE-Spins, Spreading Wild Feature, two different Free Spin Options and the three Progressive Jackpots. The only negative is the maximum win potential is not massive; however, the other features do balance it out.

Other Slots from the Kingdoms Rise Series that you may like are Legend of Elvenstone and Forbidden Forest Slot. 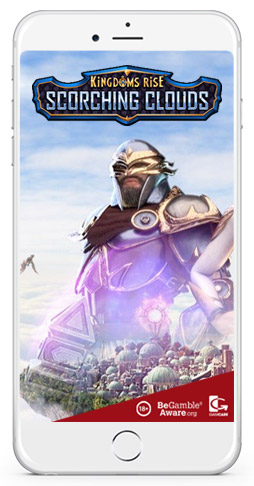