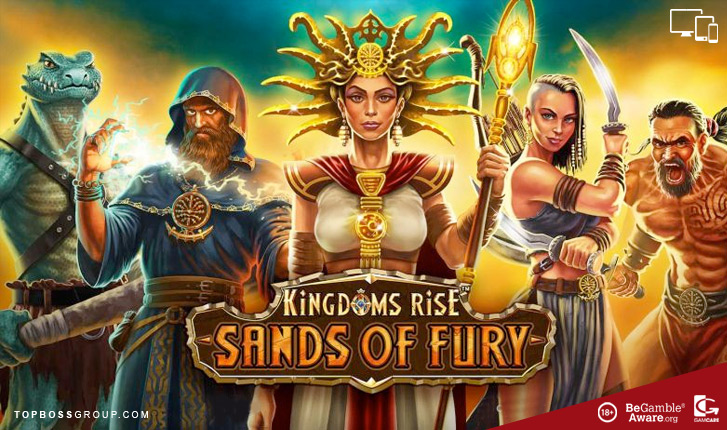 Kingdoms Rise - Sands of Fury has been rated by our slots review team and scores an excellent 89% based from the category ratings overall.

Sands of Fury Slot is another one in the Kingdoms Rise series of slots by Playtech. It is a Video Slot with 5 reels and 20 fixed paylines and wins are awarded for three to five matching symbols on a line.

When you load the game it will take you into a hazy desert scene with blurred sunlight and in the background you will see the Queens majestic Temple. On top of the reels is the Queen in all her glory surrounded by her four protagonists. Enhancing the ambiance is the gripping soundtrack which accompanies the heroic action on the reels.

Courage is the name of this game and will not go unnoticed by the Queen and her mighty warriors. As she will reward you handsomely as you venture through the treacherous desert. This slot game offers Re-Spins, locked Wilds as well as a game Token collection which players can use to buy extra features.

Take on the Sands of Fury as you edge closer to the chance at winning one of the 3 Progressive Jackpots.

Sands of Fury has enough of a betting range and definitely caters for all players no matter what their budgets are. The minimum bet is $0.10 and the maximum bet for those high rollers is $1000.

The RTP is at 96.23% but remember the tokens contribute with 0.99% and the Progressive Jackpots with 3%.

A Fury of Symbols:

Let’s start with the symbols at the low end, they are the gemstones which are blue, purple, turquoise and pink and they award you with 0.8x-1x your bet for a five of a kind. Then we have the five characters those being the Sorcerer, Lizard Wizard, Swordsman, Archer and the Queen herself. Land five on a line to win 3x-7.5 x your bet.

Sands of Fury’s characters can transform into a Wild when they retrigger the Re-Spins Feature. When you land five Wilds on a pay-line you will receive 12.5 x your bet.

The Character Wilds are key to hitting big wins as they activate the Wild Fury Feature. Each of the characters are strategically positioned above one reel which contains four possible outcomes

For this feature to be triggered you need a Character Wild to land on any of the character reels. Land 1 or more wilds at a time can reward you with wins from many features simultaneously.

Several other modes can be triggered and they are listed below:

This feature is available when you have 500 or more tokens. In this feature a Beast will appear on the screen and walk from right to left hitting the reels. As he does so he turns random positions into Sticky Character Wilds. The number of Sticky Wilds is dependent on the amount of Tokens you used.

The Queens Ritual Bonus can be purchased for 300+ Tokens and this is a pick and click Bonus game where you will be handsomely rewarded by Her Majesty with multipliers, cash prizes and extra clicks.

Below we will list what specified amounts of Tokens reward you with:

The blank symbol with the chain across it, this is a symbol you do not want to see it above your active reels as it ends the feature and unlocks the wilds in the next spin. The 5 Re-Spins are free however all other spins you pay for.

Unlike the arid desert scene the progressive jackpots are the oasis of Kingdoms Rise- Sands of Fury and every player has a chance at bagging one of these fabulous Jackpots as they are triggered randomly and could be hit on any spin.

The three Progressive Jackpots are:

Kingdoms Rise – Sands of Fury is a Pacey slot game with few interruptions and suitable for all players. It offers you the chance to try your luck at winning one of their three Progressive Jackpots, gather tokens to buy other features in the slot game and some nice winning opportunities in the base game. In Sands of Fury as in the other slots in this series the battles are suspenseful, themes fabulous, overall an epic slot with innovative modes. 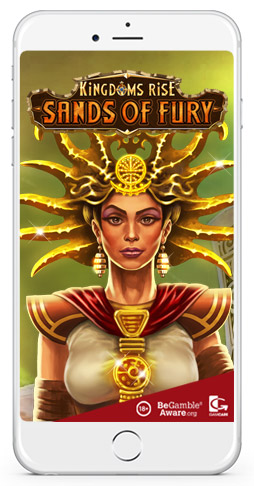