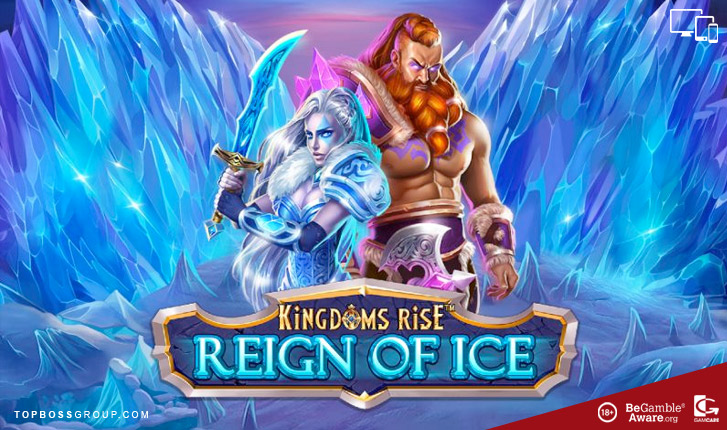 Kingdoms Rise Reign of Ice has been rated by our slots review team and scores an excellent 88% based from the category ratings overall.

Wrap up warmly as you venture into the icy mountains in this Kingdoms Rise Reign of Ice slot by Playtech. Another instalment in their 2019’s slot adventure series called Kingdom’s Rise. This one is guaranteed to send chills up your spine.

The Kingdoms Rise Reign of Ice slot has 25 pay lines that pay from left to right. It has some icy elements that will heighten your chances of winning some big cash prizes. They include Hammer Wilds, Hammer Re-spins, Multipliers, Power Strike Jackpot, Epic Jackpot and the Daily Strike Jackpot.

Another feature in this series that you need to be aware of is the fact that you can switch to any of the other Kingdoms Rise slots via the game’s map and before you know it, you could be playing Guardians of the Abyss or Sands of Fury.

There is also the Kingdoms Rise shop where you can purchase the Barbarian and Valkyrie Re-spins feature which gives players Re-spins with Multipliers as well as cash prizes as well as the three jackpots.

The visuals in this edition to the Kingdoms Rise series Reign of Ice are superb, and the setting is the Ice Kingdom, and there is a magnificent wall of ice behind the reels which add to the ambience. The symbols include four low-value gemstones and three different weapons as well as two character symbols which are Ice Valkyrie and the Ice Barbarian who is the highest paying symbol. When landing 3,4, or 5 of the Ice Barbarian in the combination, you will receive 3,6 or 12 times your total bet.

The Blue crystal logo with the gold frame is this games Wild, and it replaces all the symbols except for the Scatter Symbol.

The Hammer is the Scatter Symbol and appears on reels 3, 4 and 5 only.

The Iced Hammer is the Hammer Wild Symbol, and it will only land on reel two and replace all symbols. Should the Hammer Wild, Ice Valkyrie or Ice Barbarian symbols land on the reels simultaneously, the Hammer will
be released.

Once the Hammer Re-Spins Feature is triggered, the Wilds will then be able to land on reels 3, 4 and 5. If they do appear they will freeze on the reels. Furthermore, if the Hammer Wild Symbol lands on reel two then all regular Wilds are unfrozen and then becomes a Multiplier Wild.

The Hammer Re-Spins Session will only end when there are no more hammers left in the Multiplier Bar.

All of the previous Kingdoms Rise slots in this series have Jackpot Features, and Reign of Ice is no different. The Jackpot triggers at random, and the bigger your bet, the bigger your wins.

The Three Jackpots are:

This new edition in the Kingdoms Rise series is impressive. Pay-outs can range between 300x-1500x your stakes. Players can also purchase upgrades in the Kingdoms Rise shop for additional features allowing you to enjoy Re-Spins with Multipliers as well as some substantial cash prizes. Keep an eye out for those hot jackpots which will most certainly hot up those icy reels. 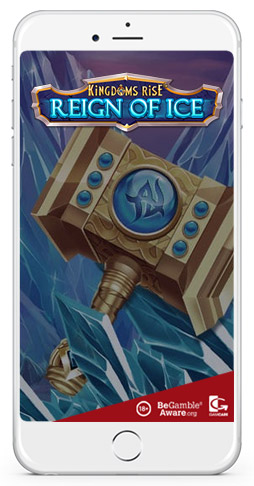