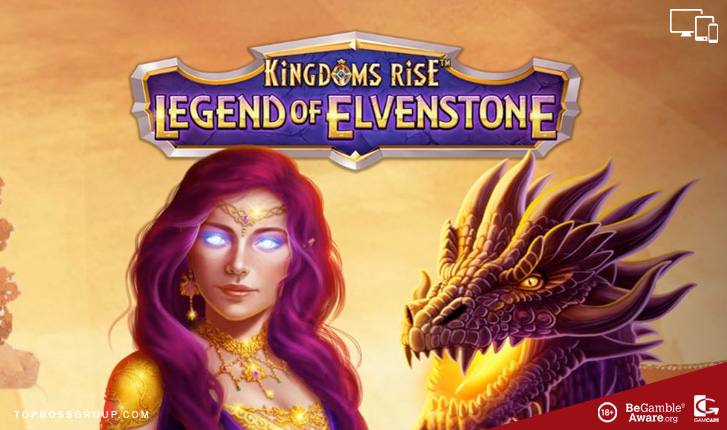 Kingdoms Rise Legend of Elvenstone has been rated by our slots review team and scores an awesome 83% based from the category ratings overall.

Playtech and Rarestone Gaming are taking you on an epic adventure with the launch of Kingdoms Rise Legends of Elvenstone Slot. This new slot game from the Kingdoms Rise Jackpot Slots includes Wilds, Multipliers and Kingdom’s Rise Jackpots in the main game.

This slot is a 5×3 slot with ten paylines with a fantasy-related theme where you will encounter fire breathing dragons, a sorceress and elemental beings. The design of Kingdoms Rise Legend of Elvenstone is magnificent, and as with all of Playtechs slots, the graphics are exceptional with sound effects that fit in with the theme of the game perfectly.

Dare to summon the Dragon and get to the bonus round for Dragon Eyes and big wins. Trigger the three Progressive Jackpots with any spin, and you will walk away the Victor.

Before you start fighting across ten paylines, you will need to select your wager. Wagers range between $0.10-$200 per line. Game tokens in Kingdoms Rise add to the games RTP which is at 96.84%

The low-value symbols you will come across when playing Kingdoms Rise Legend of Elvenstone are Helmets, Swords, Knights, Dragon Eyes and four coloured gemstones.

There is also the Fire Breathing Dragons and a Warrior Princess with glowing eyes. The highest paying Symbol is the Warrior Man Symbol, land five of them and receive a 750x payout. Next is the Woman symbol and the Rock Man Symbol.

Kingdoms Rise Paytable for five on a payline:

The Wild Drop symbol looks like a magnifying mirror.

The Dragon symbol is the games Scatter, and this triggers the Dragon Bonus. Combine this Symbol with the Dragon Eyes during the Bonus Feature, and you will receive even bigger wins.

Amongst the highlights of this new release by Playtech is the Dragon Re-Spin Feature and Falling Wilds in reel feature. If the gameplay is anything like Guardians of the Abyss, then you are in for a treat and tons of Free Spins.

The Dropping Wilds in Legend of Elvenstone Slot have three character power-ups, which involve three of the high paying symbols which will bring you Multipliers, Wilds and other generous prizes. These symbols substitute all the other symbols except for the Dragon

To receive the Hold & Re-Spin Bonus, you need to land reel-sized Dragons on both the 1st and 5th reel. This feature involves nine reels and huge awards for players.

Kingdom Rise Legend of Elvenstone has three Jackpots which are

It’s another fabulous slot by Playtech in the Kingdom Rise series. It has Wild Drops, a Dragon Bonus round with re-triggering spins and three Progressive Jackpots. There is also a chance to collect tokens to purchase bonus features at the Kingdom Rise shop. It’s an interactive game with superb graphics and not to mention somewhat enigmatic sound effects.

Other Slots from the Kingdoms Rise series are Shadow Queen and Chasm of Fear Slot. 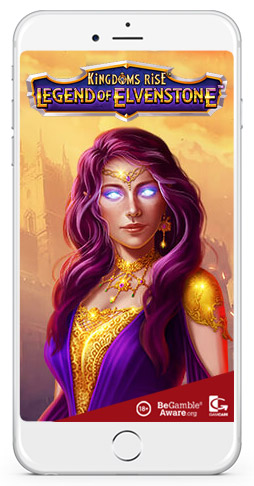