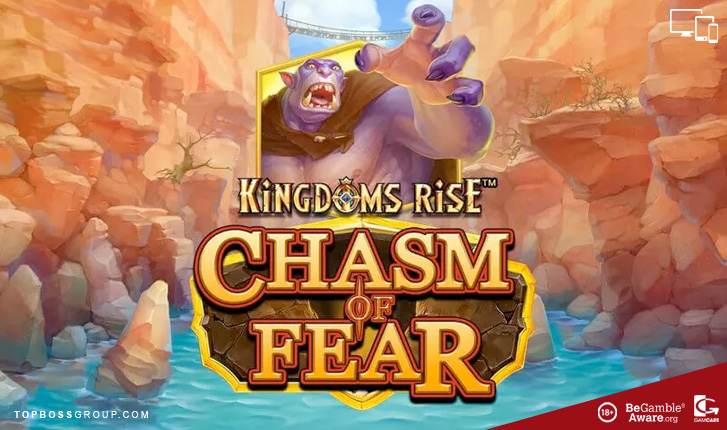 Kingdoms Rise Chasm of Fear has been rated by our slots review team and scores an awesome 83% based from the category ratings overall.

Kingdom’s Rise Chasm of Fear is another addition to the Playtech Kingdoms Rise Jackpot series. It comes with new heroes, reels of fun and stunning graphics.

The slot games reels are in the ship’s sails, almost symbolic of your pending journey into unfamiliar territories. The graphics encapsulate you into the game allowing for immersive gameplay which is not unusual when playing one of Playtech’s slots.

Kingdoms Rise Chasm of Fear’s main feature is the 3 tier jackpots which are Daily Strike, Power Strike and Epic Jackpots and they are all Progressives. The first one, Daily Strike, has to be claimed daily at a specific time of the day.

Kingdoms Rise Chasm of Fear is available on desktop and mobile. This new game is five reels 25 paylines and players can take one spin for as little as $0.25 up to a maximum of $500 per spin.

A Chasm of Symbols

The low paying symbols in Chasm of Fear are the precious gems. Each one is a different colour and shape. The high paying symbols are the three different Pirates, Serpent, Mermaids and Monkeys.

A Treasure of a Wild

The Wild in Kingdoms Rise Chasm of Fear is the Treasure Chest. This symbol substitutes for all other symbols except for the Scatter. The Wild Symbol assists in forming winning combinations.

Free Spins are a significant feature in this game and played with an additional two rows added to the middle three reels. This way, you end up with 4-6-6-6-4 reels in this mode and many more chances of landing winning symbols. Look out for the Giants that toss boulders at your ship. The big rocks are useful as they add extra symbol positions on Reels 2, 3 and 4. When this happens, Free Re-Spins will retrigger, thus adding more potential wins.

A Chest of Wins

The Treasure Chest is the games Wild Symbol. As substitutes, they are instrumental. Moreover, Multipliers can apply to them; however, there is no guarantee.

The Chasm of Fear slot links to the Kingdoms Rise Progressive Jackpot network, and at any time you could win one of the following:

Kingdoms Rise Chasm of Fear is a high variance online slot which will suit high rollers as it offers plenty of action and potentially top cash prizes. It’s a slot game with stunning 3D graphics, new twists, plus their popular three-tiered jackpots. Players are going to enjoy this latest instalment in the Kingdoms Rise series, and as always Playtech has created a winner.

Other slots in this series are Kingdoms Rise Reign of Ice and Sands of Fury Slot game. 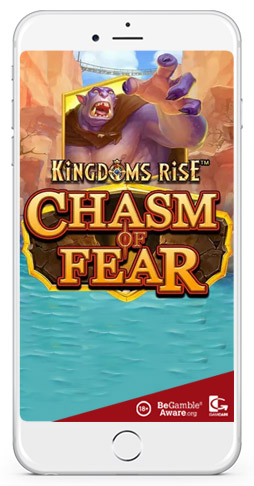