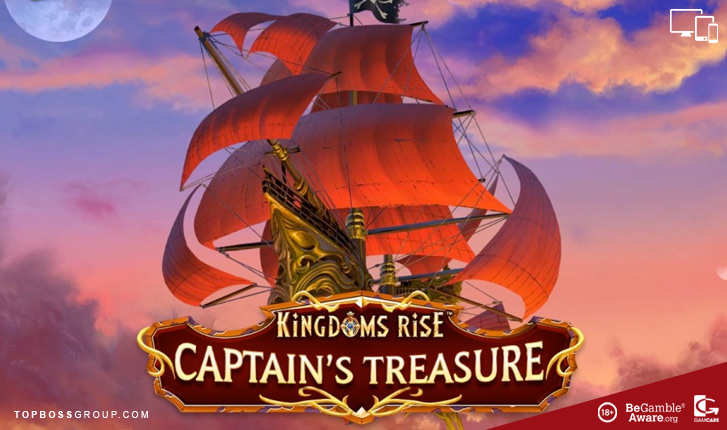 Kingdoms Rise Captains Treasure has been rated by our slots review team and scores an awesome 85% based from the category ratings overall.

Kingdoms Rise Captains Treasure is another slot game in the Playtech family of Kingdoms Rise where fearsome characters battle for supremacy, this new instalment.

It is a 6×4 reel slot with 50 pay-lines with golden reels floating majestically as they ascend above the clouds.

Playing this exciting and graphically superb slot can see you walking away with wins worth up to a 1000x your stake. There are also tokens to be collected which can gain you entry into the Bonus Features of other Kingdom Rise slots.

Enter this magical realm, populated by fierce and ferocious warriors, flying ships, mythical creatures and conquer this kingdom with Red Jack by walking away with some generous cash prizes as the suspenseful soundtrack adds to the ambience of your quest.

Players can wager between 10 -1000 coins per spin. The slot also has Autoplay and Turbo mode features, and as a medium, to high volatility slot has a rather enticing RTP of 97.00%

Kingdoms Rise: Captains Treasure’s low-value symbols are the pink, blue, turquoise and purple gems. The high-value symbols include the Captain, the Red Sailed Ship, a Treasure Chest, a Map, an Anchor and a Bottle of Rum.

The Captain is the most generous of all the symbols as he pays out 250x your stake if you land three or more of him.

The Re-Spins Bonus Feature triggers when you land the Special Wild symbol (Golden Compass). The Compass turns once on each Re-Spin and will move by one position. Where it moves to depends on where the arrow stops. It can be left, right, up or down but never diagonally.

The triggering and all new positions turn to Sticky Wilds for the duration of this feature. This feature ends when the Wild reaches the first row or first reel. This Bonus feature is only in the base game.

Playtech introduced an in-game rewards system when they launched the Kingdoms Rise Series. Gold coins can appear attached to any paying symbol, and accumulated to your Token balance. These can be used in the Kingdoms Rise Feature shop to buy features for any of the slot games in this series.

When there are no features available in the game, you can exchange tokens for three different types of features which are:

The Progressive Jackpots are the best features in the game. These jackpots are central to a single casino or all brands of a casino group. The Jackpots are triggered randomly after any spin, and they are:

Kingdoms Rise: Captains Treasure is not the best game in the series, however, it is a fun-filled game. It’s a medium volatility slot with a maximum win of a 1000x your bet in a single spin. Rise to the occasion and join Red Jack as he sets off to find the most fabulous riches in his realm. 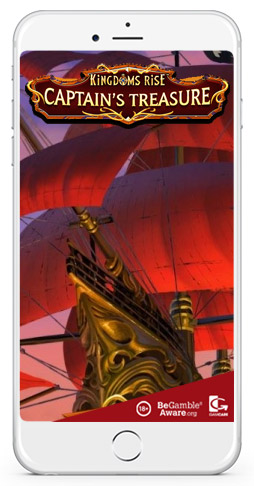