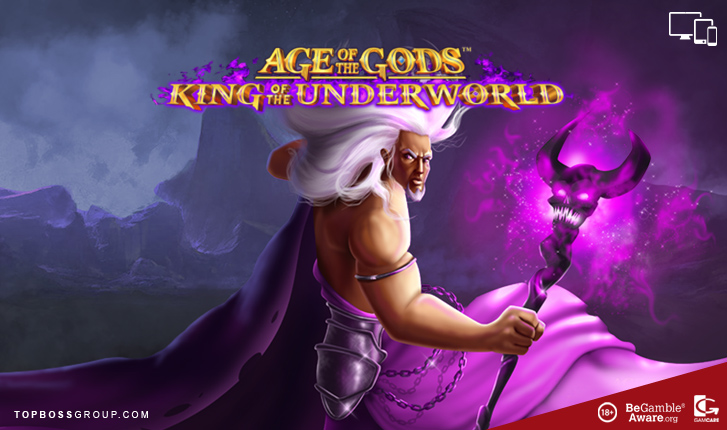 King Of The Underworld Ratings

Age of the Gods King of the Underworld has been rated by our slots review team and scores an awesome 85% based from the category ratings overall.

Play King Of The Underworld Here

King Of The Underworld Slot Features

King of the Underworld – Age of the Gods is a 5 reel, 20 payline slot by Playtech and comes with a pair of pick me bonuses.

This slot is set in the Ancient Greek afterlife and is another title in the popular Age of the Gods Jackpot Slots series by Playtech. The backdrop is made up of marble pillars and skulls and the reels flaming symbols as well as symbols relative to the Ancient Greek theme.

The visuals are exceptional as always when playing a slot by Playtech and the sweeping orchestral score enhances the slot games feel.

You will come across the merciless Cerberus Beast, the Fate Sisters and Hermes. The most important symbol in this game is Tartarus a horrible beast of torment in the afterlife.

King of the Underworld – Age of the Gods Symbols:

The symbols you will find when playing Age of Gods-King of the Underworld are flaming A, K AND Q symbols and the best standard symbol pays 50x your bet if you land 5 on a line.

To trigger the Gates of Hell Bonus Feature you need to land 3 or more of Cerberus, the three headed dog symbol on the same spin.

What you need to do is work your way through the underworld by choosing doors and winning cash prizes as you go along. Continue opening doors until such time as you unleash Cerberus or alternatively until you have made 6 successful picks to trigger this Gates of Hell Bonus Feature.

Once the above have been accomplished this feature ends and all your wins are multiplied by the number of paylines you’re playing with.

The Thread of Hell is triggered by the 3 Fate Sisters, here you need to pick from the spindles and weave your way through these fated sisters. Watch out for Atropos who will try and cut the thread, should she be successful you’ll win a prize. This feature will continue until the selected thread is not cut.

As with the Gates of Hell Bonus Feature all your wins will be multiplied by the number of paylines you were playing with.

King of the Underworld Slot Conclusion:

Age of the Gods – King of the Underworld is visually brilliant and has 2 really good bonus features offering some substantial cash prizes.

The big winner is Tartarus the slots Wild Symbol, filling the reels with this symbol will give you a whopping 10000x your total bet, now that’s not bad for a tormentor in the afterlife.

Age of the Gods King of the Underworld Overview

Slots Title: Age of the Gods King of the Underworld

Age of the Gods King of the Underworld Mobile Slot 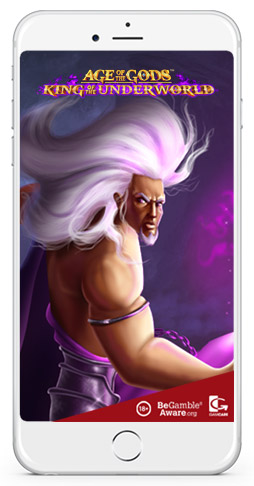