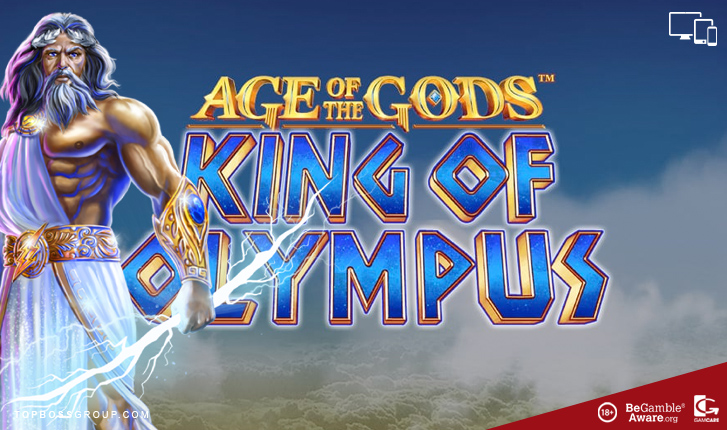 Age of the Gods King of Olympus has been rated by our slots review team and scores an excellent 86% based from the category ratings overall.

Where To Play King Of Olympus

King Of Olympus Slot – Age of the Gods Review

King of Olympus Slot is another slot in the Age of the Gods series. Unleash the fury of the King Olympus, Zeus, the King of all Gods in this 25 payline, 5-reel slot by Playtech.

Age of the Gods King of Olympus can be played on your mobile, tablet and desktop.

This slots graphics are superb, offering great visuals and notable artwork. Of course, we would expect nothing less from the King of the Gods.

On the Reels with Zeus:

The reels are full of Zeus references and they also include objects relating to Ancient Greece. They include striking sailing vessels, clay vases and golden lyres. The eagle is a symbol that is often associated with Zeus as is Pegasus the winged horse. Pegasus is known for being loyal to Zeus and delivers lightning and thunder to him all the way from Mt Olympus.

The low paying symbols are the J, Q, K, and A. When you get three on a pay-line you could have your bet multiplied by between 5x-10x depending on which symbols you land.

The King of Wilds:

Zeus acts as the Wild in this game and will substitute for every other symbol bar the scatter to complete wins. If you get 5 on an active pay-line he will reward you with 3000 x times your line bet.

The Scatter is the Zeus logo icon which awards total bet multiplier prizes of 1 x,3 x,10 x and a 100 x. Whenever two or more appear in any position on the reels.

This feature is triggered by landing 3 or more of the Scatter symbols anywhere on the reels. This will reward you with 10 Free Spins as well as an increasing Multiplier. This feature starts off with a 2x Multiplier and increases by 1 after every 2 spins.

The wild  Zeus, becomes a locked/frozen wild in the middle position of reel 3 for the duration of this feature, and no Free Spins can be re-triggered.

This slot is not bursting with bonuses, however it is also not short on action to keep you entertained for hours. There are Wilds, Scatters and Free Spins. Added to this is 4 Progressive Jackpots all adding to your bankroll whilst enjoying Zeus.

Age of the Gods Bingo

Age of the Gods King of Olympus Overview

Slots Title: Age of the Gods King of Olympus

Age of the Gods King of Olympus Mobile Slot 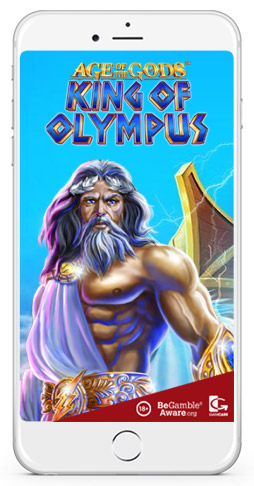