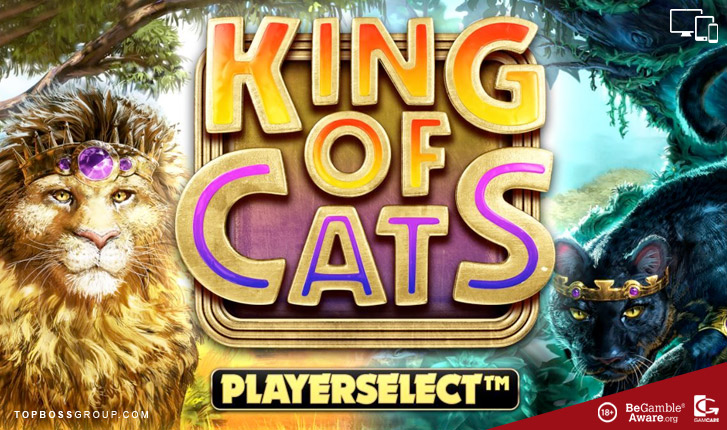 King of Cats Megaways has been rated by our slots review team and scores an excellent 86% based from the category ratings overall.

Play King of Cats Megaways At These Top Rated Casinos

The classic Megaways format is available on both variations and sees players take to 6 reels hunting for multiple symbols to cash in on the 117649 Megaways in play. It’s two games for the price of one. In King of Cats, Megaways players decide whether they enter the Lion’s Game or the Puma Game. Both compromise of different features including their own Free Spins rounds and Wild and Multiplier modifiers.

Join the Wild beats on your mobile desktop or tablet anywhere anytime and rake in some wild wins.

The game has the usual Big Time Gaming’s unique look, and in both games, players will find an assortment of brightly coloured A to 9 Royals and gemstone symbols, of which the purple gemstone is the most valuable. It pays out 25x your stake for 6 in combination.

In King of Cats Megaways, each animal is the Wild in their game, and these come with Multipliers attached. There are also standard Wilds that can land on reels 2, 3, 4 and 5.

The Scatter is the paw print gold coin, and to trigger a feature, players need to land three of these symbols.

The features in King of Cats Megaways vary depending on the feature you select to play.

In the PLAYERSELECT feature, you need to decide which feature you will play, the Puma Game or the Lion Game. Each game has a different RTP. The Puma Game is 96.70%, and the Lion Game 96.72% and each game have modifiers and features.

In the Lion Game, the primary modifier is the Wild Lion Multipliers Feature, and on any Lion, spin players could see 2×2, 3×3 or even 4×4 colossal Wilds appearing. They get accompanied by Multipliers that increase the more prominent the colossal Wild. The Multipliers are as follows:

It means the maximum win per Lion base game spin is 6060x your total stake.

Finally, land another 3-6 Scatters during the feature and receive a further 4, 8, 12 or 16 Free Spins. Players can win unlimited Free Spins, and the maximum win during this feature is 24200x the stake.

In the Puma Game, it’s the Puma Wilds Feature that boosts your winning chances. On any spin, players could see up to 3 reels turning totally wild. Each Puma Wild has a 2x, 3x or 4x Multiplier attached and the max win during the Puma Game is 1070x your stake.

Players can expect some wild action from these beasts with two different game modes, two base game features and 2 Free Spin Rounds. When you play King of Cats Megaways, you get 2 games in 1. Once again, Big Time Gaming has surpassed expectations by creating something unique with Wild Multipliers central to the action in both game modes. Now that deserves a Roar!

If you enjoy the Megaways Slots, then you may also enjoy Survivor Megaways or Star Clusters, also from Big Time Gaming.